Free Will, determinism, moral responsibility and how they work together, or don’t, is an enormously complicated question.  Honestly, it’s probably one of the most intractable and complex questions in philosophy.  In this very short piece I will only be attempting to explain a few ideas that I hope are new to some of the people reading this. (For a beautiful intro to the whole complicated mess read this Literature Review by Levy and McKenna, Recent Work on Free Will and Moral Responsibility, 2009.)

That being said, I have to confess: I don’t actually think determinism is ‘irrelevant’.  Instead I’d like to argue that finding out we live in a deterministic world and don’t have classic free will, i.e. wills that are ‘uncaused’ by anything outside of ‘us’, doesn’t in any way mean that morality is up for grabs or that we are not responsible for our actions.  In other words, when people despairingly say there is no free will and all our actions are determined, I say “so what?”  Let me explain.

Determined? Yes… but by the Right Kind of Things 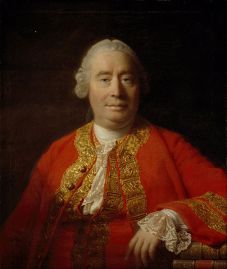 My Desires & Motivations.  David Hume (and, as always, probably some Greek before him) first made this point quite a while ago, but unfortunately it hasn’t filtered down too much into the world of non-academic philosophers.  The basic idea is that for the sake of moral responsibility our will needs to be, at some important juncture, determined by something we identify with as ‘us’.  What specific kinds of things might these be?  Well, the normal things you might imagine: our interests, goals, values, moral convictions, characters, motivations, processes of deliberation, etc.  (And additionally, these things need to be left up to us and not ultimately determined by some other mind with their own interests, goals, etc… among a few other clauses which space won’t permit.)

Importantly, this seems to be how we already think about morality.  For instance, imagine someone who just gave a huge sum to the poor.  If their action is motivated by considerations of reputation, without any concern for the needy, then we wouldn’t think their action was morally worthwhile, even if the effect is good.  But if their charity comes from a compassionate character and a desire to help the needy, regardless of reputation earned, then we would think they are morally praiseworthy.

Imagination, Deliberation & Uncertainty.  One important “right kind of thing” our decisions should be caused by is our own deliberations and choices.  Though I’m butchering Daniel Dennett’s beautiful book Freedom Evolves, one main point is that actions of our own ‘free will’ are the products of certain processes that occur within us.  Specifically, these processes involve what I like to think of as “imaginative information gathering.”  We can imagine a multitude of possibilities, or models of the way the world could be, and then pick between them based on our personal interests and values a la Hume.

So, even if the future has been determined for all time, we will never be little Laplace Demons who are able to gather every tiny scrap of data and process all of it in time to make real world decisions.  In other words, if there is only one (meta)physically possible future, i.e. the world is determined, there are innumerable epistemically possible futures given our limited information for us to imagine.

What matters for free will is that we are the kinds of things that go through a process of imagining and modeling various possible futures.  Both before and after this modeling we seek out information – are voracious informavores as Dennett says – and piece together a world, however incomplete.  From this range of possibilities we finally choose one based on our interests, moral convictions, etc.

When our actions are dependent on this process, of course parsed out much in more detail, we are freely choosing.  And as Hume pointed out, what matters morally is what in us ended up directing our choice this way or that.

Turning the Tables: Defining Free Will in Terms of Moral Responsibility

Two Kinds of ‘Free Will’.  When defining free will simply (and crudely) as “an uncaused will” or “caused by nothing but ‘myself’”, you get the kinds of tensions that keep some determinists up at night.  However, why define it this way?  Why not define it differently?

We all have a very real experience of free will, of choosing between live ‘options’, and of being morally ‘responsible’.  There is a very real phenomena I seem to be pointing at with these words that begs an explanation.  So it seems that there are really two separate kinds of free wills, or ways in which we use the term free will.  Specifically, ‘free will’ can refer to 1) a concept or definition or 2) a phenomena we experience. 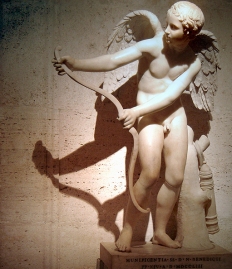 Daniel Dennett: Imagine everyone believes that True Love is caused only by a little god with a bow striking two unwary singles. What happens when we find out Cupid is only a myth? Does this mean the phenomena of Love we experience is only an illusion? Or can be ignored as unimportant?

To understand this think of “Love”.  Love is an very real and powerful emotion, yet there are a thousand definitions and understandings of what it is and causes it.  Psychologists, sociologists, evolutionary biologists, and theologians all understand the term differently and operate on different academic definitions.  So in the first way we could, for instance, simply define “love” as “mutually altruistic pair emotional and social bonding” and then work off of that definition.  Then, in contrast, I could ask: What is this phenomena over here in front of me that we all experience and often call ‘love’? And, further, why accept this definition of ‘love’ as opposed to some other?  How should we define this phenomena and what characterizes it?

Redefining Free Will.  Let’s now approach free will and responsibility via this second route in which the phenomena of choice is taken as ‘a something’ to be explained.  If we start here, then free will’s relationship to moral responsibility becomes not a difficult problem but an important bit of data.

Here we can instead redefine free will, i.e. the phenomenon of choice we experience, in terms of responsibility.  Stephen White describes this in The Unity of Self: instead of using metaphysics to ground ethics, i.e. defining free will and then figuring out how it relates to moral responsibility and whether the latter exists, we should instead use ethics to fix what our metaphysical criterion is.  White states that

An agent could have done other than he or she did just in case the ascription of responsibility and blame to that agent for the action in question is justified (p236).

Blame/praise worthiness, a responsiveness to blame/praise, the capacity for moral reasoning, and so forth, then, are what are important for an action to be free.  Why does a child or animal (or maybe even sociopath) not fully have free will?  Why are they not responsible for their actions?  Because moral blame and praise do not describe or cannot affect their choices.  They cannot engage in moral reasoning, which might include things like perspective taking, understanding others’ differing interests, empathy, universalizing rules, etc.

The important thing to glean from this perspective is focusing first on the reality of responsibility.  Further, in addition to this, holding people responsible, morally blaming wrong doers, praising the upright, and so on simply works.  Moral blame and praise (very different from punishment and rewards, btw), holding people accountable for their actions, and other moral considerations daily effect how we think about our choices and make our decisions.  So arranging the problem in the first way just doesn’t seem to make any real world impact on how we should live, and live together.