A Sketch of the Present Debate

A front page article in the August 26, 2013, edition of the New York Times reports that, “the Egyptian military has enlisted Muslim scholars in a propaganda campaign to persuade soldiers and policemen that they have a religious duty to obey orders to use deadly force against supporters of the ousted president, Mohamed Morsi.”  This is just one contemporary example of how religions have been used throughout countless centuries for the purpose of maintaining social control and furthering political agendas. 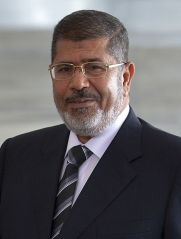 Mohamed Morsi, President of Egypt and one of many throughout human history to use religion and ideology to steer countless believers for their own gain.

This Muslim vs. Muslim edict is a surprising variant of the more common practice of granting licenses to control people who believe in different Gods or variations of the same God.  However, I can still understand it, to some degree, because I grew up in a small Midwestern community when Presbyterians were taught to distrust other Presbyterians who endorsed the revised version of the King James Holy Bible (which clearly was no longer the word of God); when Presbyterians of all stripes were taught to revile Catholics who were forced to drink real wine at communion instead of the watered down grape juice that (the Presbyterian) God preferred; and when both Catholic and Protestant children were warned to keep their distance from Jews…unless they got very ill and needed to see a physician.

Fortunately none of us carried weapons, but we all learned about holy wars conducted to prove whose God was the right God.  We were comforted by victories recorded by our side and sickened by stories about the devastation of our people.  Of course, these childhood memories make light of the serious plight of people who currently suffer from deadly incursions of warriors across boundaries defined by religions.

By Richard Dawkins. ‘God Delusion’ is one of the best selling books ever on atheism and anti-theism.  Click for more.

A force that voiced the opinion that all religions are at fault for perpetuating this insanity became mobilized near the turn of the current century.   Concurring with Thomas Edison who famously labeled all religion’s “bunk”, Sam Harris (The End of Faith), Richard Dawkins (The God Delusion), Daniel Dennett (Breaking the Spell), and Christopher Hitchens (God is Not Great) slammed religions for clinging to worldviews that, in the words of Harris, came from a time when “a wheel barrow would have been an example of emerging technology.”  Excoriated from pulpits nationwide, these proponents of atheism were accused of being emissaries of the Devil, prophets of Satan.

Leaving out the Soul

I was fascinated by the ensuing debate.  It was my hobby until I noticed a missing element.  Neither the “scientific materialists” nor the religious leaders who vilified them were inclined to bring up the topic of the soul and its afterlife.  Did I miss-hear the message of the fire and brimstone minister of my youth who stressed the position that, in the end, God would judge of all souls and determine their final, everlasting destinations?  Was I the only kid in the congregation who got that message?  Or is it old hat and no longer relevant to the current debate?  Or is it possible that the idea of a soul and its afterlife had become an elephant in the room that nobody talks about?  My affirmative answer to that question became a premise that sparked a late life shift in my teaching and research career.

“We received a green light to offer the course in fall, 2010, and, by fall 2013 (the last time the course was offered), the enrollment cap of 500 students was reached moments after the opening of registration. “

I imagined the possibility of teaching an entire undergraduate course on beliefs about the soul and its afterlife.  Initially, it was not an easy sell to the administration, but I had the good sense to entice a colleague, Leonard Hamilton, a brain scientist, to join me in the effort to have the course listed under the umbrella of Rutgers Signature Courses.  Signature Courses feature “enduring issues”, (e. g. energy and climate change, immigration, species extinction, human nature and diversity) and, in our view, the causes and consequences of soul and afterlife beliefs fill the bill as an enduring issue.  We received a green light to offer the course in fall, 2010, and, by fall 2013 (the last time the course was offered), the enrollment cap of 500 students was reached moments after the opening of registration.  Clearly students were ready to talk about the elephant in the room.

The Many Sides of the Soul

The second meeting of the class each semester set the tone for the entire course.  Beginning with Catholics, students were invited onto the stage and were asked to report what they were told to believe about the soul and its afterlife when they were growing up.  Catholics were followed by Protestants, then Muslims, then Jews, Hindus, and Buddhists.   That session helped create a safe platform for a splendidly interdisciplinary course on the history of soul and afterlife beliefs; philosophic foundations of various beliefs about the soul; the evolution of brains that are receptive to dualistic (mind/body separation) thinking; how early formed beliefs become internalized and hardened against the intrusion of alternative beliefs; modern versions of ancient tribalism; and present day, hot button, issues like whether or not intelligent design should be part of the science curriculum in secondary school systems.

Our goal for the course was modest.  We wanted students to think about an important topic and there are multiple indicators that we accomplished that goal.  Many students entered the course believing that they had a soul that was destined to survive the death of their bodies and they left the course with that belief more or less intact, even though they realized that there is no reliable evidence that anything of the sort has been scientifically verified.  At the same time, the course made students aware of how their beliefs had been transmitted to them and less inclined to be manipulated by a call to arms to defend them.

Teaching the course was a good way to end my career and I am looking forward to seeing how the ideas generated in the course evolve under the auspices of an online course comprised of videotaped lectures for Rutgers students and a MOOC (massive open online course) that will be mounted for public viewing in 2014.

Click here for a paper assigned in the Soul Beliefs course,  The Anatomy of Internalized Beliefs, that summarizes my current views on how early-learned beliefs can become lifetime fixtures.

For more information you can also view both my TED Talk video and a Rutgers interview with Leonard Hamilton below.  You can also see a TED blog post and TED Q&A about it.