I was on an overnight bus heading to Bimbilla from Accra with the first Humanist Service Corps team. As usual in Ghana, the bus was loaded beyond capacity and some passengers were sitting on plastic stools in the aisle.

As the rattletrap slowly manoeuvred its way down the beat up roads of rural Ghana, the loud chatter slowly died down as people tried to get some sleep.

A young man sat on a plastic stool in the aisle beside me. He looked to be in his late twenties and up until now had been having a very loud conversation with another man who was five seats ahead of us. Thankfully, he was sleeping now with his head bobbing in an awkward angle with every jerk of the bus.

With my headphones in my ears and my eyes closed, I was trying to lull my body to sleep when it happened.

The young man beside me was slowly rubbing his hand on my jeans-clad right thigh. My heart began to race as a million thoughts ran through my tired, fuzzy head.

Is he doing what I think he is doing? Did he fall asleep with his hand on my leg? Did I imagine the movement of his hand?

I moved my leg and nudged his hand back onto his own lap. He didn’t make any movements to indicate he was even awake.I closed my eyes again and waited.

His hand dropped back on my leg. He didn’t wait long to return. He was rubbing his hand back on forth on my thigh again.

I was disgusted and furious. He was definitely doing what I thought he was doing. He had not fallen asleep. I was not imagining anything. I moved my leg again and his hand slid off and immediately returned. He was done playing. So was I.

When I spoke, my voice was loud and angry. And shaky. I don’t remember what I said. But whatever it was, it woke my colleague who had been sleeping beside me and he started yelling at the young man too.

Of course, he said he didn’t do anything. He had been innocently sleeping when I started yelling at him. I was acting like a crazy person.

The noise woke more people on the bus. Some passengers sent curious looks our way and went back to sleep after losing interest. A lot of them were laughing at the obviously hilarious situation.An old man at the back of the bus yelled down to us, laughing. “Don’t blame him. It is because her thighs are nice and soft.”

Oh okay. My bad. What was I thinking bringing my nice and soft thighs with me on a bus ride? 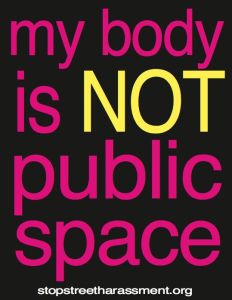 My colleague was yelling at the old man now. “You are part of the problem…..”

The commotion died down and everyone lost interest and went back to sleep.

We had ruined the fun by getting upset about something as hilarious as sexual harassment.I sat in the dark bus fuming with anger and feeling humiliated.

I refused my colleagues offer to change seats with him. “I won’t let him scare me away” I said.

The young man kept his hands to himself for the rest of the bus ride. I stayed awake; vigilant and weary. He slept like a baby. I knew he had already forgotten when he stepped off that bus and walked away with his arm slung around his friends shoulder, laughing and chatting.

I wrapped him up carefully in everything he made me feel and I put him away in my little box. He won’t be lonely there.

Cleo is a secular humanist/atheist from the Volta Region of Ghana. From an early age, she was driven to expand her knowledge of the world through music, books, and movies. She is still very passionate about music and credits that love for her humanistic perception of the world. After graduating from high school, Cleo studied graphic design for a year and worked as a secretary for a small company in Accra before taking a short course in child care and working as a nanny in Saudi Arabia. She also spent a year in South Africa working again as a nanny and touring the country. During that time, she joined the Durban Freethinkers of SA, which led naturally to her joining the Humanist Association of Ghana when she moved to Accra a year and a half ago.