I want to start with a disclaimer and a qualification.

First, this post isn’t about bashing God.  This post is about understanding humanity.  It’s about finding joy as flourishing individuals and friends.  It’s about exploring meaning and morality in a difficult world.  In this way, this post isn’t about God at all – it’s about you and me.  With this goal in mind, I’m hoping to explore someone I see as a literary figure, just like Aesop’s Tortoise and Hare, Heinlein’s Valentine Michel Smith, or anyone else from the infinite list of fictional characters out there.  Regardless of whether you love Him or hate Him, whether you’re a theist or an atheist like me, God is probably one of the most interesting and novel characters of all time, and certainly the one with the biggest fandoms and fanfics ever.

Rabbits and Turtles don’t need to actually be able to speak and organize competitions for us to be able to gain a moral from their story. (Illustration: Arthur Rackham’s “The Hare and the Tortoise”)

Second, as to my qualification, there are a wide range of nihilisms.  Someone might be called a nihilist for their skepticism of external reality or for their refutation of any legitimate political institutions or for their dismissal of certain religious beliefs.  Here I’ll be referring specifically to moral nihilism, or at least certain kinds of moral nihilisms.  And just so I’m being clear and up front, I’m specifically arguing that God doesn’t believe in objective or non-arbitray ethics or values, or, at very least, simply lives in a world where He knows about these things but yet cannot take part in them.

This is a bold claim, I know, so let me just get into it.  Following are three arguments.  The first two pull apart some of the consequences of arguments theists put forward about what God is.  These two discussions aren’t original at all.  The last is one of my own short reflections on the nature of our own uncertainty and frailty and what that means for an omniscient and omnipotent Deity.

Socrates first parsed out a beautifully subtle distinction in Plato’s Euthyphro dialogue concerning God’s relationship with ethics.  In it Socrates explores a thread that, once pulled slowly, unravels the idea of God as any grounding, cause, or basis for morality.  In the dialogue Socrates asks the pious Euthyphro if God commanded moral laws because those laws were good or, alternatively, if moral laws were good because God commanded them.  Which comes first and grounds the other, the goodness of the laws or God’s commands?  Basically, does God know of some independent reason behind the laws He commands, in which case it is those reasons which actually justify those laws?  Or is it that X is good/right and Y is bad/wrong merely because God arbitrarily commands it and for no other reason than that?

Proposing each question together as two exhaustive and mutually exclusive options, as Socrates did, seems to cause hardship for the idea of God’s grounding moral authority.  Either God is not the source of ethics, although He may play other roles, or His commands are arbitrary.

Now there’s a lot to say about the former path of these two options in this horned dilemma, but that’s for another post.  So let’s stick to the common theistic theory that what is right is in fact right because God commands it, and for no other reason than that.   This is known as Divine Command Theory.   In DCT, God’s commands are arbitrary by definition.  For some more discussion on DCT, check out the video below from Yale Prof of Ethics Stephen Darwall.

So what follows for God if DCT is true?  Well God being omniscient, He must know that his divine proclamations are completely arbitrary.  He knows that, as they are subject- or mind-dependent proclamations, specifically ones dependent on God’s mind, they are subjective by definition.  They don’t reflect anything intrinsic about murder, charity, compassion, or anything else in the world, except for how God’s preferences, tastes, whims, and decisions, i.e. mind, arbitrarily happen to work.  God could have preferred or decided anything else, and He wouldn’t have any better reason for this change because He never had a reason to begin with.  In the end, God lives in a world no different than the average ethical egoist or emotivist human, except of course for the fact that He can enforce His agenda a bit better.

The whole project of ethics, given DCT, is completely arbitrary and subjective if God has any part in ultimately grounding it.  For God what is good is merely a fact about what He has arbitrarily chosen to command.  And as an omniscient being God understands this, just like any egoist or emotivist.  (For alternative naturalistic groundings to morality, check out my post here.)

God is an Automaton who Cannot Act Morally

But what if someone doesn’t accept that God arbitrarily commands this or that.  Maybe the theist just opts for the second path in the horned dilemma.  Morality, therefore, isn’t founded on God but instead on some other independent reasons.  God may then choose to behave morally according to those reasons instead of his arbitrary preferences or decisions.  But let’s not go to quickly.  What do we mean by ‘choose’ when talking about a being who is by definition perfect and always good?

Let’s take a few steps back.  The only reasonable discussions of the Problem of Evil all revolve around ideas about Free Will.  Why is there suffering in the world?  Well it is justified and outweighed by free will’s appearance on the scene.  It is often argued that free will is what we need to be moral and, specifically, to enter into a relationship with others, including God.  We need the possibility to choose evil in order to genuinely choose good and we need the opportunity to choose to decline friendship in order to really accept it.  If we can’t choose to be moral or choose God then we would just be robots or slaves.  That doesn’t sound too complicated.

But hold the phone!  Relationships are a two way street.  I may choose someone else to have a relationship with, but I’m only a stalker if they don’t reciprocate.  So therefore God must also have free will!  Otherwise He’s a robot who can’t enter into friendships or even be moral in the most basic sense.

But the claim that God has free will and could sin if He wanted to isn’t obviously true.  In fact, we have good reason to doubt it.  As a being that is by definition Omnibenevolent and Perfect He is a kind of moral automaton.  For God to be God, He must act perfectly and without sin.  It is part of his nature and the definition of God that He is good, always loving, and perfect.  Many equate God with the Good or Love itself.  He therefore doesn’t just lack the option to sin or hate or commit a wrong, God doesn’t even have the option to come one iota short of perfection.

It seems we can’t keep both the free will defense of the Problem of Evil and maintain that God is a perfect being.  But even without this dilemma, it still seems difficult, if not impossible, to argue that God is not a moral automaton, a kind of robot without free will.  Further, being omniscient, this Divine Machine can then see that even though others can act morally and enter into relationships, He never can.  He is condemned by His nature and only allowed to make the perfect choice.

God is an ‘Anti-Sisyphus’, Unable to Live a Fulfilling Life 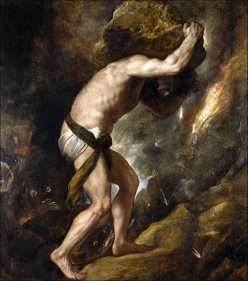 The worst kind of toil is that which lacks any possibility for pride and accomplishment.  Sisyphus can never succeed. (Titian’s “Sisyhphus”)

I’ve always loved the story of Sisyphus.  A Greek punished by the gods to the worst kind of toil.  For eternity Sisyphus must push a rock up a hill.  But as he pushes the rock it becomes heavier and, by design of the gods, inevitably rolls back down the valley.  Camus concluded this was the plight of humanity and that in response we must raise our heads to this absurdity and shake our fist in defiance.  But this conclusion is silly.  You and I actually do accomplish things.  We finish our studies, get that raise, bring up the next generation, cure diseases, and so on.  We experience happiness, exhilaration, adventure, and flourishing.  We actually do, occasionally, bring the rock to rest at the summit and relax with an earned sense of accomplishment and pride before scaling even greater peaks.

God, however, is in the same boat as Sisyphus, but in the reverse.  He is a sort of Anti-Sisyphus.  The reason His tasks are similarly empty of any meaning, validation, accomplishment, pride, and so on is because God cannot fail.  God is omnipotent by His very nature.  Further, He always knows the outcome of any endeavor.  Even Sisyphus still has hope since, for all he may know, the gods will change their fickle minds.  It is God’s very omnipotence and omniscience which binds Him in a meaningless world.

What makes accomplishing what we put our minds to so absolutely beautiful and validating is the very fact that accomplishing anything is difficult, that we might not make it and that the outcome is uncertain.  Real moral courage is fearing these uncertain results, personal risks, and possible failures but then trying anyway.  But how can God ever feel this sense of accomplishment and pride?  How can God courageously face the world if He can never be at risk, never fail?

In this last argument, I have to say that I kind of feel bad for God.  Not only does omnipotence bar one from genuinely accomplishing something difficult, taking pride in anything, or the virtue of courage, but omniscience also bars one from adventure.  Just imagine how monotonous life must be when nothing is a surprise.  There is never a book or movie you don’t already know the ending to.  Of course God can be a part of causal chains that results in good things happening, like helping a plane crash land safely.  But hope, courage, adventure, surprise, striving for accomplishments, pride in His success, overcoming challenge, suspense, and so on are just like colors to a blind man for God.  He knows of them, but can never experience them.  They’re simply inaccessible.

So what can we learn from all of this?  If anything, what matters in our humanity is our frailty and our ignorance.  In a bit of irony, they’re actually the only means to adventure, courage, and most of what provides the foundation for a flourishing life.  It is only because we can fail that we have the possibility to overcome the odds and succeed.  It is only because we can decline friendship and hurt others that makes giving our love and our help so much more meaningful.  So use your free will and go out and do something in the world.  Use it for good!  Use if for adventure!

4 responses to “3 Reasons Why God is a Nihilist; Or, Showing Sympathy for God”