By James Goodrich, Rutgers Class of ’14

About a month ago, Paul Chiariello wrote on some of the foundational issues of moral disagreement between those with secular viewpoints and some fundamentalist religious ones. He concludes that, in some ways, the theist and the atheist are in “the same boat”. I’ll trade his metaphor for another and ask: are we climbing the same mountain?  The moral philosopher, Derek Parfit, hopes that upon reflection, we will find that all of the disagreeing moral theorists have actually been climbing the very same summit, but on different sides. And although we don’t see each other yet, we can still hope that we’ll meet at the peak.

So, if religious and secular ethicists are climbing the same mountain, then what obstacles might prevent them from meeting at the top?

Climbing the Moral Mountain: Just because others are no where in sight or on very different paths doesn’t mean you won’t eventually meet them at the same peak.

At first glance, this may seem to some like a hopeless enterprise. Abortion, infanticide, women’s rights, and euthanasia are huge areas of ardent disagreement between some forms of religious and secular ethical theory. One might think that the theist and the atheist are just too different in their systems of beliefs to ever come to any kind of consensus on matters as difficult as ethics.

Upon some reflection, I think Charles Camosy and Peter Singer’s recent exchange at Rutgers University on September 9th on the topic of religious and secular ethics can leave us with some hope for resolving our disagreements. In his most recent book, Peter Singer and Christian Ethics: Beyond Polarization, Camosy attempts to do just this by showing that there is a surprising amount of common ground between Singer’s secular ethics and the Catholic Church’s natural law tradition. For instance, even though they disagree about whether or not the fetus is a person, they agree that if the fetus is a person, then it would be morally impermissible to kill it. This may seem like a bit of a trivial point, but it might actually be indicative of the mountain being the same. In contrast, there is a popular view – made famous by Judith Jarvis Thomson – that takes it that if the fetus were a person, then a woman’s right to her own bodily autonomy could outweigh the interests or right to life of the fetus. 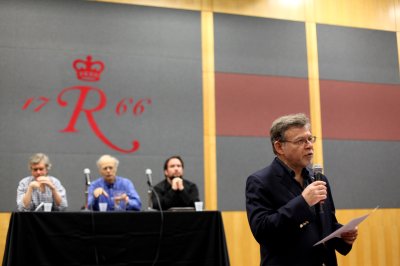 So, this example actually shows that Singer’s secular ethics is in agreement with one aspect of the Catholic tradition (though they still disagree on whether the fetus is actually a person or if the potential to become one is sufficient for full-fledge moral status), while in disagreement with other secular views of ethics. That is, both Camosy and Singer make the same objection to a particular kind of argument made by other secular thinkers working in ethics. If they can make the same sort of objections in some cases, then perhaps they really are on the same mountain. Progress can be made! Thus, perhaps religious and secular viewpoints needn’t lead to a special case of disagreement after all.

That being said, while there may be nothing unique about their disagreement, there may be unique obstacles in the context of religious and secular ethics that need to be addressed. As Camosy points out, this isn’t really all that surprising from a historical point of view, “It is interesting to think about Mill and company developing early utilitarianism right out of Christian England. It would be historically strange if there wasn’t some overlap.”

Of course, as Singer made sure to point out when he spoke with Camosy at Rutgers, they are still miles apart when it comes to the morality of abortion – Singer thinks abortion is often permissible and Camosy thinks it can’t ever be intentionally “aimed at”. So, while we can point to some significant areas of overlap, perhaps many of the most important questions are still disagreed upon. If this is true, then what lessons can be drawn from Camosy and Singer’s exchange?

Peter Singer, Professor of Bioethics at Princeton University and a Laureate Professor at the Centre for Applied Philosophy and Public Ethics at the University of Melbourne

One lesson is that progress is possible. Camosy is a vegetarian and defends the position on both ethical and religious grounds. At Rutgers, he admitted that he became a vegetarian, in part, because of Singer’s work – most notably, Animal Liberation. When prompted by some questions, Camosy defended the view not only on similar philosophical grounds to Singer, but disputed that there was a theological basis for vegetarianism as well. If the discussion between secular and religious thinkers can cause the other to see that some position is unethical and this can be defended on either view, then it seems as though something like progress has indeed been made.

If we aren’t starting from such diametrically opposed theoretical positions that progress can’t be made, then it seems as though either side can budge on their moral theory given some sufficient argumentation. But, if this is true, then why hasn’t more progress been made?

In interviews after the Rutgers event, Singer and Camosy each gave the same answer: dogmatism. Camosy elaborates:

Furthermore, I think most disagreement comes – not from differences in evidence in argument – but because of social or emotive reasons. Someone is turned off by a group of people who hold a particular view, or part of their self-identity comes from not being like another group, and thus the arguments are built on top of that first principle as to why such a group holds mistaken views. And so on.

We would be naïve to think that there aren’t overly dogmatic persons or those who define themselves by their opposition in both camps. Given this thought, could it be the case that we ourselves, in some sense, are responsible for a lack of ethical progress? Could progress be made if we all were all actually able to sit down together with open minds and our best arguments? I think it’s not irrational to be hopeful. It is unlikely that we can completely do away with some level of dogmatism, but if the reason disagreement persists is in part due to social reasons, then perhaps given enough time progress is indeed obtainable.

Of course, I have glossed over something of great importance: Singer’s views don’t exhaust the secular viewpoints and Camosy’s views don’t exhaust the religious viewpoints. There are many secular thinkers who disagree with Singer’s view. And given the plurality of religious traditions with different ethical systems, there are surely a great many religious thinkers who disagree with Camosy. This certainly complicates the matter of disagreement, but Singer and Camosy’s conversation is a good case study for what might be in store for us if we can set some our dogmatic tendencies aside.

We might come to find, at least with respect to ethics, that religious and secular thinkers really did just start from different places at the base of the mountain and will someday meet at the peak.

To watch the debate itself, please check out the video below!

5 responses to “Are We Climbing the Same Mountain? Secular-Religious Ethical Disagreement and the Peter Singer & Charles Camosy Discussion”