Philosophy is the oldest study in the world, arguably beginning when Plato established the Academy in 428 BCE. Simultaneously, it is arguably now the most disparaged, where every few months a leading scientist will claim philosophy is dead or metaphysics is fairy-laden. There are at least two ways to respond to this: (1) to defend philosophy on the scientist’s own stomping ground, citing examples of progress within the scope, and (2) to justify philosophy on its own merit, to defend the goals of philosophy.

The purpose of this article is to appeal to the scientifically-minded to embrace philosophy because of both its contribution within scientific domains and inquiry and on its own merit.

What is the scope of philosophy? It’s very clear that psychologists study people, biologists study life, physicists study energy, etc. So what on earth does the world’s oldest study actually study? A popular answer is that philosophy studies philosophers, but this just pushes the bump in the carpet. Another popular method of working this out is to look at the word “philosophy” and to see its meaning, which is “love of wisdom.” Unfortunately, this is too cryptic and still just pushes the bump in the carpet. Perhaps a look into the hard-and-fast divisions of the subfields of analytic philosophy will help. They are:

In this article I’ll map out one such “philosophy of X”study and appeal to the scientifically-minded skeptic that it is both properly a field of philosophy and is as rigorous and as worthwhile as empirical science. Specifically, I think that there are two intellectual activities at play: (1) the “first-order” observation and hypothesizing about physical phenomena, and (2) the “second-order” interpretation and synthesis of these hypotheses into the broader corpus. In (2) is where I see the scientifically-minded skeptic embracing the practice of philosophy.

Philosophy of Physics: An Open Question

Hypothetically consider an omniscient, but somewhat limited, god at the very beginning of space and time. This god only knows everything about the present moment, but it is indeed everything, including the position and velocity of all particles and the laws which govern them. Whatever laws are is a question for another article.  All we need to think about is what is logically consistent with such an imaginary being. 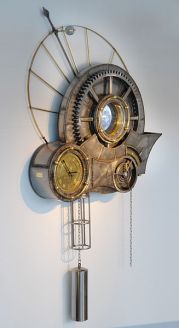 Is the universe like the classic ‘clock work’ analogy? Or is it guided by probabilities and wave functions?

Is this enough information to determine how the universe will end? If it is not possible to determine the course of the universe like this, are there probabilities? Perhaps there’s a certain probability of a heat death and a certain probability of a big crunch death of the universe. Could this hypothetical being determine these? Are the probabilities somehow “in the world” and observable, or merely just a instrumental frequency count we assign to sufficiently complex phenomena? If this omniscient being can neither determine the course of our universe nor work out with certain probabilities, what is it that binds together frames in space and time? Is it entirely random? Whether or not these are these problems interest you, these are the sorts of questions where I think philosophy can help physics, in the interpretation of these physical observation and hypotheses.

We have two questions here: (1) What is? (2) What does that mean? Philosophers are interested, just like physicists, in determining what is. In addition, I hold that philosophy is uniquely the study of how to “glue” what is with our everyday lives. This is where I think philosophy parts ways from pure observation.

This taxonomy is not at all divisive, it’s just the case that some eager minds wish to carefully observe the world and hypothesize about it (what “is”), while others want to take those hypotheses and make them cohere with the rest of the corpus of human understanding (what does “it” mean?), and those categories are not at all mutually exclusive. This distinction is between a straightforward hypothesis of the physical world and a picture, understanding, or conception of experienced world. The question of what the world is actually like will overlap with the study of metaphysics, specifically, it is exactly the study of ontology, which asks, “What is being?” The question of how and whether we can come to know what the world is like is an epistemological question. Whether or not there is a pre-determined end to our actions should inform our intuitions about ethics, like can you blame someone for an action they were pre-determined to perform? As such, the question trickles into how to organize our society in the fairest way. Furthermore, I take this to be how the hardcore physicists’own domain of inquiry will contribute to the classic questions of philosophy.

The determinism/indeterminism debate above is directly observed in quantum phenomena, where our best hypotheses use a wave function to describe the state of particles. However, I claim that nothing in the fundamental physics of our world could in principle answer questions like (2).  That’s one of the domains of philosophy, to reconcile the latest and greatest discoveries with other, more ordinary observations and our strongest intuitions. Nothing about the way the world is is going to tell about how we should act, for instance. No fact that might come to be known will tell us whether we can know that fact. Some of our best theories of physics hold we should abandon our everyday notions of space and time, of simultaneity, of color, of mind. My use of philosophy is to reconcile this objective study of the world with what it’s like to be human.