The road from Cancun to Chichen Itza—home of El Castillo, one of the New Seven Wonders of the World—is not made of dirt; it is not dilapidated, pot-hole ridden, winding, bumpy, shabby, or anything else. In fact, it is one of the most divinely well-kept roads I have ever been on. Seriously: the Mexican government really knows what tourists want to see, and the level of comfort they’ll require to see it. Spanning 196km (~122 miles), the smooth and straight 2-3 hour drive, experienced from the inside of an air-conditioned coach bus, gave our tour guides ample time to lecture on ‘the wonders we were about to behold’ while pampering us with what I suppose, in some horrific parallel universe, could be called ‘breakfast and coffee’. Anyway, the time was roughly 8:00am and, like all the other ignoramuses on the bus, I was still thinking singularly about altar sacrifices—à la Mel Gibson’s Apocalypto.

As I stepped off the greyish blue autobús at 9:30am, my tour guide, Juan, forebodingly warned me for the umpteenth time: do not, under any circumstances, buy anything from the street vendors. I nodded, suppressed the little pang of holy-crap-I’m- far-from-home anxiety that travelers sometimes get, and shuffled on toward the national park’s entrance. There I was greeted by several dark and oily men donning feather caps and daringly small loin-cloths—a crude caricature of Mayan attire, I’m sure. Evading the faux-Mayan warriors, my girlfriend (Allison) and I handed the dead-eyed park employee our entrance tickets, and, through an enormous and ominous archway, entered the world of the ancient Maya.

El Castillo (aka the ‘Main Pyramid’) 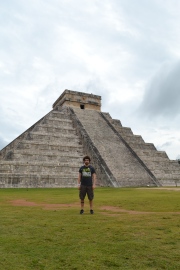 Your unshaven author repping the punk scene in front of El Castillo. Click on picture to enhance.

If you can, visit Chichen Itza in the morning while the air is still calm and there are relatively few people inside the park; ideally, you want conditions such that if you position your eyes and body in a clever way, you can pretend that it’s only you and the pyramid standing there—no one else. That’s what I did, and not even the most skilled wordsmith could forge a worthy description of the act. Standing at the base of that massive and austere beauty, marveling upward, I was kidnapped by something which can only be recalled as a historical hallucination. I’d experienced it once before, almost, at the Parthenon in Athens, but too many other tourists were there. This time was different. The stillness of the park was joltingly replaced by the dull roar of bustling townsfolk; I could hear the laughter of friends calling to one another from across a humid and dusty marketplace, I could see a mother scolding her child for running too far, I could smell the roasting corn and coagulating animal blood; I heard clearly a priest’s call thundering down from atop the edifice: “We offer you the heart of this man, oh great Rain God, so that you may give us a good harves…”.

I was taken from my fantasy by Juan’s voice, growing louder behind my back: “… see that altar at the very top there? They would put the still-beating hearts of people they sacrificed on that.”

For the most part, Westerners find the ritualized butchering of human beings in the name of ancient Mesoamerican religion to be somewhere between minimally and moderately disagreeable. This, predictably, hasn’t stopped Hollywood from fetishizing and capitalizing on it!

Now it’s my turn do the same…

Let me begin with a question: would you allow your god to starve to death? Let me answer that for you: no. The Mayans believed that blood was food (or some kind of weird metaphysical nourishment, depending on who you ask) for their gods . Furthermore, they believed that human blood contained the most ‘potency’, and was therefore the ultimate sustenance they could offer (Sharer and Traxler 2006, p. 751). I’m telling you this so that you don’t think of the Mayans as a gang of blood-thirsty lunatics, but rather as a society of ultra-zealous religious primates—not like that’s much better, but at least it’s not as foreign to you, O’ fellow Westerner.

Forms of execution were brutal and many, the list includes (but is not limited to): decapitation, disembowelment, heart removal, arrow firing squad, throwing someone wearing heavy jewelry into an inescapable sinkhole filled with water, and burying alive. Those sacrificed were often high-ranking enemies, like the king or high priest of a neighboring tribe (Sharer and Traxler 2006).

An interesting deviation from this trend, however, is seen in their most popular sport, Pok-ta-Pok (also known as hip-ball, after the way the players hit the ball – click the link for a video). At the end of the match, the captain of the losing team would offer his head to the captain of the winning team, who would proceed to then dutifully and happily decapitate his opponent. According to Mexican historians, this was a great honor for the losing captain: his death was publicly opined to be a key element in the securing of a happy god and a good harvest; his blood would spill onto the earth and into its cracks and from it crop would spring bountifully. It is for this reason and others that the second most popular attraction at Chichén Itzá is the Great Ballcourt (the largest Mesoamerican ballcourt ever found), where the hip-game was played. The court is opulently adorned with reliefs showing the process by which blood enters the life cycle and nourishes the gods; you also can’t walk very far in Chichén Itzá without being reminded of the intestinal decor inside your body.

When Allison and I emerged out of the jungle again, this time 550 meters south of El Castillo, this is what we saw:

Look like anything familiar? That’s right, El Caracol’s dome-shaped structure eerily foreshadows the design most observatories follow today. But why? The reason modern observatories are dome-shaped is because they house enormous telescopes that need a relatively large range of motion—surely the Mayans didn’t have telescopes? Of course not. El Caracol has that distinctive dome shape because it was once part of a larger cylindrical structural that housed a spiral staircase; the dome is a funny coincidence that one probably shouldn’t dwell on too long, lest they wish for a one-way pass to the ancient aliens conspiracy theory convention in Roswell, New Mexico (which I’ve also been to, by the way!). The exposed dome is about the only coincidental thing about El Caracol, though; almost every other facet of the building’s architecture served an important astronomical purpose—a fact which, to me at least, makes it all the more aesthetically striking.

The Mayans hadn’t an inkling of the heliocentric model, but they knew well the positions of different planets around the Earth at various times throughout the year. One planet that they were particularly enamored with was Venus—a romance told in every brick of the observatory. They knew that “Venus appeared and disappeared on the western and eastern horizons at different times in the year and that it [takes] 584 days to complete one cycle.

They also knew that five of these Venus cycles equaled eight solar years”(Stockton). From this they deduced that Venus must appear at ‘northerly and southerly extremes every eight years’. In the mid 1970’s a researcher by the name of Dr. Anthony Aveni discovered that El Caracol is precisely aligned with the extremes of Venus; moreover, the building has several sight lines which point to the “sun’s horizon position at summer and winter solstice and the two times between May and August when the sun passes through the zenith directly overhead” (Stockton). Mayan astronomers, like so many of their predecessors and successors, had a fierce yen for mathematics; but more importantly, they saw the incalculable utility of mathematics in predicting natural phenomenon. Historical evidence indicates that the Mayans kept a wealth of records on their mathematical notation, as well as their religious practices and scientific endeavors. But, in a wrenching parallel to the destruction of Alexandria’s famous library some fifteen-hundred years prior, thousands of Mayan codices (books) were burned for containing ‘heretical’ information. Only four codices remain today—from which comes most of our knowledge of these ancient people. Imagine what we would know today had those books not been burned! The man who ordered the incineration, Bishop Diego de Landa, had this to say on the matter: “We found a large number of books in these characters and, as they contained nothing in which were not to be seen as superstition and lies of the devil, we burned them all, which they (the Maya) regretted to an amazing degree, and which caused them much affliction” (Clendinnen, 70). I’ll leave you to formulate your own opinion of him.

On the bus ride back from Chichen Itza, I thought about why ancient Mayan civilization is so shrouded in fantastical myth, and if our culture could possibly be doomed to the same obscurity. Realizing the answer, I took a deep breath, looked at my sleeping girlfriend’s angelic and peaceful face, removed the well-creased copy of Robert Heinlein’s Stranger in a Strange Land from out of my backpack, and grokked as deeply as I humanly could.