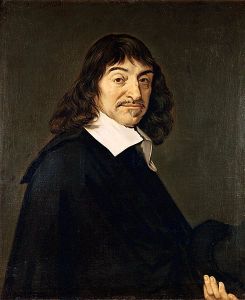 In the early 1600s Rene Descartes penned what has become the most oft-quoted catch phrases from epistemology, if not all of philosophy. Compare the phrase to other philosophical catch phrases, like the Golden Rule, an ethical claim popular in many religions, or the “We hold all men to be created equal” in American politics. However, in my experience, there is not the same general understanding of what Descartes meant when he wrote the phrase.

In this piece I hope to give the reader a modern epistemological context for understanding what Descartes penned in 1637.

The 3 Building Blocks of Knowledge

What does it mean when you say you “know something”? What type of thing can even “be known”?

These are basic questions, yet they will prove to be important. Bring up in your mind a piece of knowledge that you have, something very basic, let’s say, “I am reading a blog post on Applied Sentience right now.” You see the computer screen in front of you with the webpage open, the blog post front-and-center, and slowly little symbols on this webpage start to make sense as words. On the basis of this you come to know that you are reading a blog post. This is a perfectly natural use of the word. Therefore, at least a portion of this type of thing that comes to be known can be expressed as a proposition – a sentence that can either true or false.

What can be said of this proposition that you know? If you stopped reading Applied Sentience, stepped away and yet, for some odd reason, held on to your belief about reading a blog post right now, would it be appropriate for knowledge? The intuition is a resounding “no”. Therefore, it seems that it is important that for you to have knowledge with respect to any proposition, it is important that the proposition be true. We can’t know things that are false. We retract our claims to having knowledge quite a lot with statements like, “I just knew that my team was going to win, but alas, they did not.” It is also absurd to know propositions that cannot logically be true, like, “It is raining and it is not raining (right here and right now).”

What relationship must we hold with regards to the true proposition about you reading a blog post? There are an uncountable number of true propositions, but there is something different between any given true proposition and the knowledge we hold. It is exactly that, in fact, it is that we do “hold” the proposition – if only in our minds. You believe that you are reading a post on Applied Sentience. If you did not believe it, then it would be odd and inappropriate for you to claim you had knowledge. (In fact, claims of this variety are members of Moore’s Paradox.)

And so we have a true belief. But is knowledge anything more? There are certain sorts of true beliefs you could hold, and still fall short of knowledge. For instance, you could accidentally predict the coming lottery by use of chicken bones. It is unlikely, but definitely possible, so it is worth our consideration. Why do chicken bones which yield true beliefs not give us any real knowledge? Because they are not appropriate justification. When reading this blog post, you believe the truth on the grounds that you see a computer screen with a blog post open.

With a few simple tests of our intuitions, we have come to conclusion to what most modern and ancient epistemologists think is at least necessary for knowledge: justified true belief.

Descartes knew of this formulation of knowledge, but he thought it was unobtainable with regards to the typical cases we would call ‘knowledge’. Descartes would say that you do not have knowledge even for our simplest propositions, like that you are reading a blog post right now.

What Descartes noticed that made him think this is the idea that you cannot discount the possibility that you are being deceived. The way that Descartes presented this concern is by saying that it is always at very least possible, for example, that you’re crazy, dreaming, or even that an Evil Demon is causing you to experience a blog post in front of you. Notice that, even in these crazy example, you can have a belief with what appears to you to be an appropriate level justification. But Descartes was nervous that, despite this, our experiences cause beliefs that are not true.

This is what is called a skeptical argument, as it leads to skepticism where we naturally intuit that we have knowledge. Descartes would say, however, that there is no level of justification which entitles you to think your belief is true with regards to ‘sensory data’, as they cannot be infallible – there is always a possibility you’re wrong. Descartes still wanted to be able to form justified true beliefs about the world, however, and he especially wanted to have knowledge of mathematics, science, and God. His struggle was to find a system which was both infallible against the Evil Demon type arguments and yet possible for human agents. He examined all of his beliefs, searching for any that survived the Evil Demon.

And then, he noticed that there was one belief that the Evil Demon could not possibly deceive him of!

“I think, therefore I am.” Applying our standards for knowledge – true justified belief – we see that would be impossible to actually think this while not also believing that you think it. The justification that one has for their thinking is personal or internal to the person alone, which is what makes it immune to the Evil Demon. The truth of our own existence is something only we can access; it would be logically impossible for us to reject our own existence since there we need to exist to do the ‘rejecting’. This argument applies only to the first-person perspective, since, as Descartes would say, there is no way for you to know of the thoughts of others are without the Evil Demon ‘possibly’ interfering.

It is on this foundation that Descartes eventually thought he was able to restore his belief in science, mathematics, and God. Descartes wanted the same obviousness and necessity in his other beliefs as he had with his “I think, therefore I am.”

Does knowledge require infallibility? Do you need to be able to discount all of the logical possibilities to know that the sun will rise, that you have a birthday, or that the White House exists?

Descartes may have thought so, even if most epistemologists (academic philosophers that ask these kinds of questions for a living) don’t agree.  But with this initial exposition into the analysis of knowledge, you are more armed than ever to find your own answers to these questions.

4 responses to “Of Evil Demons and Betting on Chicken Bones: Understanding Descartes’ “I Think, Therefore I Am””