The Humanist Chaplaincy at Rutgers University recently led a group of Rutgers students as a Humanist delegation to the Interfaith Leadership Institute hosted by the Interfaith Youth Core and New York University this past summer.  The purpose of the Institute was to help train undergraduates and University staff how to plan and execute inter-religious programs, usually with a humanitarian component.

The Interfaith Youth Core (IFYC) is a pioneer in the inter-religious dialogue movement with their effort to include Humanists and atheists.  With a checkered past, inter-religious events often have united participants around treating creeping Humanism and the anathema of atheism as a common foe – so inviting them to the table as equals presents, to say the least, quite a few hurdles if not a whole paradigm shift.

The following are three essays by the three student members of the recent Rutgers Humanist Delegation – each with a very different perspective on their experiences at the IFYC’s Leadership Institute.

The Quest for Neutrality – Ben Davis 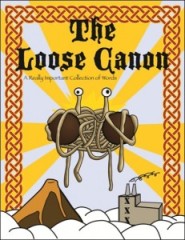 The Loose Cannon is the official crowd-sourced scriptures of Pastafarianism.
*Click Here to Read It*

Pastafarianism is often viewed as purely an insult- a way of telling people that their entire belief system is as ridiculous as the most random things that could come out of Bobby Henderson’s mind.  That’s never what it was to me.  I was first drawn into the Rutgers student club by the excuse to dress like a pirate and laugh a bit at just how hilarious the parallels to Christianity really were. I stick with it, however, because of the core message: keeping religion apart from science education.

I have never had a problem with people holding their own religious beliefs.  In fact, I see Pastafarianism as my own personal way of defending religious freedom for everyone.  Shock therapy, yes, but the goal is to keep two separate thought processes- those regarding science and those regarding religious beliefs- apart, each unaffected by bias from the other.  It has also been my goal to promote this same lack of bias between different religious groups; allowing everyone to believe in whatever they feel to be true without being bullied out of it by others.  Yet, I remained concerned that not everyone would fully understand this goal at the Interfaith Youth Leadership Conference.

I recently went to the Interfaith Youth Core’s Leadership Institute technically representing the Humanist Chaplaincy at Rutgers, but also as president of the Pastafarians. In some cases, I felt obligated to explain this nuance when my friends and I were asked what groups we represented.  It never caused any problems; we were in a “no-judgment” zone after all. And while I sensed a little unhappiness from one person I told the above story to, most people didn’t seem fazed when I fully explained myself.  But no matter how much I fully believed in the cause of people of different religions coming together for the common good, I felt a bit out of place- and even guilty- coming from a group that the others might find offensive.

Not that I was going to let that put a damper on my time with the Institute. I met some truly great people, and we came up with a number of ideas for the Rutgers inter-religious community that I can only hope we may put into practice one day soon. In spite of my own reservation, I knew that the ultimate goal of understanding each other and putting aside our differences to do what’s right was far more important.  I confided in our mentor about my worries, and he assured me that I didn’t have anything to worry about, and that I certainly shouldn’t feel guilty about attending the conference.

I’ve come to realize that if I want to truly appear neutral to others with regards to religion, I shouldn’t be so worried about explaining myself fully and honestly.  Not to be too immensely cliché, but actions do speak louder than words.  So I will be happy to prove that I support people of all religions having their own beliefs and working together regardless of them.  The conference helped me prepare for just that: taking steps that will promote inter-religious cooperation.  Besides, the Flying Spaghetti Monster’s “Eight I’d Really Rather You Didn’ts” all promote peace among those who disagree- within reason, of course (in fact, all that we are told to challenge is ideas which are bigoted, misogynist, hateful)- and I plan on adhering to them.

Jimmy Palmer decked out in full pirate regalia, the holy robes of Pastafarianism, for a ‘Talk Like a Pirate’ Day event on Rutgers’ NB Campus

When speaking about interfaith work how I preform this effort is taken seriously. So when I visited the Interfaith Leadership Institutes hosted by Inter Faith Youth Core (IFYC) and New York University it was dismaying to see their approach at defining the work as interfaith. To explain this personal dismay I should differentiate my approach to the IFYC’s approach and note how this may affect you in acting on either. To make my position clear I endorse and support the choice of individuals to join the IFYC, but if you don’t there is another option

On the IFYC website it says, “Eboo’s [the founder of IFYC] core belief is that religion is a bridge of cooperation rather than a barrier of division.” The way one would do this is by performing service projects that sometimes have religious discussion as a part of such projects. The only way they can do this and give a voice to as many people as possible by using ‘safe space rules’. These rules require avoiding criticism of other people’s religious/philosophical points of view. The outcome of this, and the end goal, is to humanize the religious/philosophical group in question via the representation of the individual. One can gain as a bonus the knowledge that individuals within a single sect, religion, or philosophy may disagree between themselves about the positions which define their identity.

My manner of approach, which I will call it ‘Secular Interfaith’, takes a different method than above. The only time I see religious discussion mattering is when it is in disagreement. The only way to make a space for civil conversation is acceptance that the other point of view matters just as much as your own. When performing Secular Interfaith work one does the service project with the understanding that those who wish to discuss religion with one another may do so. Since it is voluntary we can keep the independent rule book of everyday decency and still say where we disagree without gasping at the sound of ‘you’re wrong’.

It is your option on how you wish to approach this work- IFYC or my own ‘Secular Interfaith’ version. While it may not be a true dichotomy, with a lot of overlap between them, the latter is the one I can give which seems to work best from my perspective. The point of this secondary option is for devout skeptics, like atheists, who see a huge ground for intellectual dishonesty when another’s, or even your own, beliefs can’t be questioned and scrutinized. The point of IFYC is for the inclusive nature of people who don’t feel the impulse to debate the ideas of the individual interfaith worker.

And although we may disagree, or have differing goals and styles, I commend Eboo for being able to further a robust interfaith program which I hope prospers.

The most controversial questions for the Rutgers Humanist delegation to the IFYC’s Leadership Institutes were some of the most basic. What is the necessity for “interfaith” work? Should atheists even participate in such work? And what should be the boundaries for inter-religious partnerships?

No doubt, the workshop was a basis of some internecine bitterness. By casting our lot in with the ‘religious’, some atheists feel that we ensure the movement’s long-term survival; others believe that we destroy our own values in the process. Striking a happy balance between the exploitation of atheists towards ulterior motives and a wholesale submission to Western atheist values is an unenviable task indeed. But in the end, our internal debates were never the primary concern for the IFYC organizers.

As is appropriate to the zeitgeist, the spectre of Islam hovered over the workshop like the stench of mothballs in a closet that hadn’t been open for ages. The founder of the event, Eboo Patel, was a Muslim, and you could otherwise get a good sense of who held authority during the three days by looking for the veils and skullcaps. This space might have been open, and even liberating, for those who derive the totality of their beliefs, values and attitudes from religion, like many Muslims do. But for those of us who didn’t, and who were required to express some religious value as a prerequisite for group charity work, the workshop was often profoundly uncomfortable.

In “speed-faithing” events, for instance, where individuals had the chance to explain their religious values, I heard countless stories of how, “after 9/11,” unspeakable acts of abuse targeted “American Muslims.” You could make small talk in return about your own cutesy sect, and many of the Muslims would silently smile and nod, but the public relations coup did not belong to you after the exchange.  Of course, it was taboo to speak deeply about that elephant in the room: why resentment against radical Islam might be understood and justified. If you were here, then you simply agreed that religion is a nearly unalloyed force for good: otherwise, _why are you here?_

As an American atheist, I believe instead that the total secularization of this country’s culture and institutions, with the result of a society similar to the rest of the post-Christian West, would be a nearly unalloyed force for good. Because of these convictions, I cannot support the resurgence of a religious life in the public square, which is what the Interfaith Youth Core represents. Nonetheless, I have made a good-faith attempt to understand and do in fact sympathize with the aims of this movement that has so graciously reached out to atheists and humanists like me. But atheism is not just another religion, and organizers of events that attempt to include us should think about how their core values might replicate the religious hegemonies in society that many atheists are trying to escape.

One response to “Three Atheists Walk into an Interfaith Dialogue….”