A while ago I had a discussion with some friends about homosexuality and morality.  Eventually I made the comment:

Well it doesn’t directly affect you. If you didn’t know it was happening, what negative effect would it have on your life?

To this they responded something to the effect that homosexuality “degrades” the values of society and has been part of the downfall and collapse of empires and nations. It was just so obvious, they claimed, simply look at Sodom and Gomorrah or the Greek and Roman Empires!

I didn’t quite know what to say about all of this then.  Frankly it was more shock than anything.  But after going home I knew I could easily look into this empirical claim.  They made a confident assertion about the causal relationship between social phenomena.

I decided to look it up.  Specifically, I decided to, first, do a case study on the Greek/Hellenistic and Roman Empires, which they themselves claimed were ‘ruined by homosexual lusts’.  I also decided to throw in Japan, so as to look at a country without the same kind of Western history or Judeo-Christian mores, as well as general ‘Global Trends’ in the past 100-200 years when homosexuality has been increasingly accepted.

The following is a brief outline of some things I found and my own little comments on them. My sources are mostly Wikipedia as well as a variety of other sites.  I didn’t cite everything, but you can easily copy-paste text and search it yourself.  I tried to take just concrete and objective facts and dates as measurements of acceptance of homosexuality and when they finally collapsed in part for this reason.   If you challenge any of the data, notice I left something out or question interpretations, please comment below.

Homosexuality in Ancient Greece and the Hellenistic Renaissance:

’385 BCE Plato’s Symposium is published. Plato argues that love between males is the highest form of love and that sex with women is lustful and only for means of reproduction. Only with men, can the Greek male reach their full intellectual potential.’  Sexual intimacy was common between older mentors and younger students. 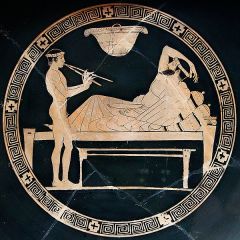 “A nude youth plays the aulos for a banqueter: Attic red-figure cup by the Euaion Painter, ca. 460–450 BC”

’338 BCE The Sacred Band of Thebes, an undefeated elite battalion made up of one hundred and fifty gay couples, is destroyed by the forces of Philip II of Macedon who bemoans their loss and praises their honor.’

’326 BCE Gay/bisexual military leader Alexander the Great completes conquest of most of the then known Western world, converting millions of people to the gay-friendly Hellenistic culture and launching the Hellenistic Age.’

End of the Hellenistic Age and Greek/Macedonian Empire:

Notes on the Greek/Hellenistic Empire:

Plato is the teacher of Aristotle who was Alexander the Great’s, one of the most world famous homosexuals of history, tutor.  Alex the Great then went on to conquer the known world and set up the precursor to the Roman Empire, see next section.  Homosexuals, bisexual’s and those who supported such had major roles in founding and creating the best of Hellenistic civilization, which lasted for centuries afterword.

Acceptance of Homosexuality in Roman Empire:

“146 BCE – Although the establishment of Roman rule did not break the continuity of Hellenistic society and culture, which remained essentially unchanged until the advent of Christianity, it did mark the end of Greek political independence.”

“27 BCE – The Roman Empire begins with the reign of Augustus. The first recorded same sex marriages occur during this period. The Roman Empire is a time in which art and literature depict homosexual love in a positive light. Romans, like the Greeks, celebrated love and sex amongst men. Two Roman Emperors publicly married men, some had gay lovers themselves, and homosexual prostitution was taxed.”

“98 – Trajan, one of the most beloved of Roman emperors, begins his reign. Trajan was well known for his homosexuality and fondness for young males. This was used to advantage by the king of Edessa, Abgarus, who, after incurring the anger of Trajan for some misdeed, sent his handsome young son to make his apologies, thereby obtaining pardon.”

“130 – Emperor Hadrian’s beloved Antinous drowns in the Nile, and upon Hadrian’s death, Antinous was deified. He is actually the last non-imperial human to be deified”

“218 – The emperor Elagabalus begins his reign. He married a man named Zoticus, an athlete from Smyrna, in a lavish public ceremony at Rome”

“305- 306 Council of Elvira (now Granada, Spain). This council was representative of the Western European Church and among other things, it barred homosexuals the right to Communion.”

“314 Council of Ancyra (now Ankara, Turkey). This council was representative of the Eastern European Church and it excluded the Sacraments for 15 years for unmarried men under the age of 20 who were caught in homosexual acts and excluded the man for life if he was married and over the age of 50.”

“342 – The first Roman law against homosexual marriage was promulgated by the Christian emperors Constantius II and Constans.”

“476 – The traditional date of the fall of the Roman Empire is September 4, 476 when Romulus Augustus, the last Emperor of the Western Roman Empire was deposed by Odoacer.”

Other Dates for ‘End of Roman Empire’:

Justinian the 1st, The Last Roman Emperor and a Christian

“395 – the death of Theodosius I (the last time the Roman Empire was politically unified),”

“406 – the crossing of the Rhine by Germanic tribes after the withdrawal of the troops in order to defend Italy against Alaric I.”

“408 – the death of Stilicho, followed by the disintegration of the western army,”

“565 – The death of Justinian I, the last Roman Emperor who tried to re-conquer the west.”

Notes on the Roman Empire

The Hellenistic Empire’s art, culture, philosophy and religion flowed into that of the Roman Empire.  As you can see homosexuality was widely accepted from its beginning up until Emperor Constantine when the Empire was formally converted to Christianity.  With the new religion, after nearly 600 plus years with a culture that was pro-homosexual, homosexuality is discouraged and outlawed.  The Empire then only lasts another 173-260 years, depending on which dates you want to use.  This may seem like a lot, but remember that this is Rome’s ‘Age of Decline’.  It lasted for centuries more, but in a weaker and weaker state.

It appears to be clear that Rome’s rise corresponded with more liberal positions on homosexuality and its stricter anti-homosexual stance corresponded to its disintegration.  If anything, this indicates that acceptance of homosexuality is needed for a society to flourish.

The Acceptance of Homosexuality in Japan:

A Japanese homosexual couple (1750). The youth on the left is wearing a traditional woman’s kimono.

“Unlike the West, in Japan sex was not viewed in terms of morality, but rather in terms of pleasure, social position, and social responsibility. While modern attitudes to homosexuality have changed, this is frequently true even today. Like the pre-modern West, only sexual acts were seen as being homosexual or heterosexual, not the people performing such acts.”

While homosexuality had never been viewed as a ‘sin’ in Japanese society and religion, ‘sodomy’ was restricted by legal prohibition in 1873. This was done mostly to emulate Western laws. The provision was then repealed seven years later by the Penal Code of 1880.

“Japan has no laws against homosexual activity, and has some legal protections for gay individuals. In addition, there are some legal protections for transgender individuals. Consensual sex between adults of the same sex is legal, but some prefectures set the age of consent for same-sex sexual activity higher than for opposite-sex sexual activity. While civil rights laws do not extend to protection from discrimination based on sexual orientation, some governments have enacted such laws. The government of Tokyo has passed laws that ban discrimination in employment based on sexual identity.”

The Japanese Empire and Progress:

I don’t think I have to do any research to convince anyone that Japanese culture is highly sophisticated and that the Japanese economy is on par with the West.

Japan never included homosexuality in its list of moral no-no’s.  It outlawed homosexuality for a few years merely to appease Western powers.  Yet it has been a central economic, cultural, political powerhouse around the world.  Even after being demolished in WWII it only took a few years to recover.

Like Greece and Rome, homosexuality in Japan has never been considered as a moral abomination and the acceptance of it has not correlated at all with economic or social disintegration.

Countries and Dates of Decriminalization of Homosexuality in the 1800s:

1974 1st open Homosexual in US pub office; 1983 1st openly Homosexual member of US Congress; 1984 Berkeley, Cal. 1st US city to ensure health benefit to Homosexuals; 1992 WHO removes homosexuality from the ICD-10 (its official list of diseases); 1995 the Human Rights Campaign (US NGO) adds homosexual rights to their agenda; 2000 Vermont 1st US state with Civil Unions; Currently several US states plus DC recognize same sex marriages with a number of other recognizing domestic partnership.

1) Increased Peace: no wars have ever been fought between democracies (barring skirmishes in Georgia and Russia, though both can be argued aren’t actually democratic nor had an actual war).

3) All but two countries are now identified as democratic.  In the 1940 to the present the number of countries scoring 8 or higher on Polity IV scale (1.0-10.0), a widely used measure of democracy, jumps from 7 to 65.

For comparison, in England in 1841, then the world power, 40% had to sign contracts with a ‘general mark’ because they could not even write their own name.

The global trends are as clear as can be.  Policy towards homosexuality has been overwhelming liberal with increasing acceptance in the past 100-200 years.  During this same time almost all indicators concerning quality of life and civilizational ‘advancement’, instead of decline, have shown vast improvement.

In other words, acceptance of homosexuality in fact correlates with the strengthening of the social fabric.

110 responses to “A Global Historical Survey: Does Accepting Homosexuality Lead to Civilizational Ruin?”