Pussy Riot: A Punk Prayer, the new HBO documentary that aims to tell the personal story of the three women who were jailed for their provocative political performance in a Russian church, opens with a quote by Bertolt Brecht:

“Art is not a mirror to reflect the world, but a hammer with which to shape it.”

Although unwilling to make such a confident assertion itself, this film does highlight those explosive points of intersection between politics and art, and provokes many questions about the power of performance.

By now, you have probably heard of Pussy Riot, the feminist punk group hailing from Russia.  Its anonymous members pen lyrics critiquing the Russian government and society, don neon balaclavas, and appropriate public spaces with their radical performances.  But no performance was as infamous as the one which got three of its members arrested, and subsequently sparked an international media obsession.

Nadezhda (Nadia) Tolokonnikova, Maria (Masha) Alyokhina, and Yekaterian (Katia) Samutsevich were arrested on charges of “hooliganism” early last year when Pussy Riot stormed the altar of Moscow’s Cathedral of Christ the Savior to perform a song criticizing Russian President Putin and his allegiance with the Orthodox Christian church.  Nadia and Masha are still serving their two-year sentences.  This documentary, which premiered at Sundance only one year after this event, aims to tells the stories of these three women through documentary coverage of the ensuing trial and interviews with their family members.  (Some supported the endeavor, while others were shocked by the events.)

Nadia and Masha both are also married and have children (whom they have not been allowed to see).  Katia, on the other hand, expresses that one of the oppressions she is fighting against is the societal pressure for all women to marry and have children.  Not all women dream of that, including herself, she declares.  This feminist agenda is even more subtle and insidious, implies Russian President Putin, who finds it abhorrent that these women have forced the rest of the world to utter the word “pussy” aloud.  In fact that is part of their agenda, I would think.  A reappropriation of a word that is not inherently negative on its own, but which garners all its negative connotations from its association with femininity.  This movement to rescue such words is not new. 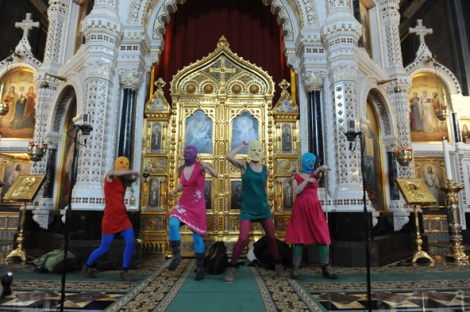 Members of Pussy Riot perform in the Cathedral of Christ the Saviour in Moscow. (Image borrowed from http://tmagazine.blogs.nytimes.com/.)

Their feminist activism is actually one of the areas I wish the film had shown more about, but the documentary is somewhat unfocused in its message.  Stylistically, too, it is a confused patchwork, veering between stylized, “music video”-esque shots to straight forward talking head interviews.  Some of the footage is Pussy Riot’s hand held documentation of their own events, and one interview sequence at the beginning is not clearly from the documentarians or from some sort of trial investigation footage.  It is not the most sophisticated nor self-aware documentary, but it does its job of entertaining and informing to some degree.  The 90 minute film serves as an engaging and entertaining introduction to the events that have taken place so far, but it is only a superficial introduction to the complexities of the politics and philosophies involved.

The most notable of which may be the fact that the Pussy Rioters did not fully understand the implications of their actions, and were surprised to discover how much offense they had caused the religious sector.  The contention over the offense caused to the Russian Orthodox church was enormous, and reveals how culturally complex some issues are.  What we may be eager to condemn or condone may be a far more complex matter, entrenched in a tumultuous cultural history that we may not fully understand.  That is not to say that we should not be concerned about a violation of the human right to free speech, but it is to say that we should not be blind to a history of oppression of the human right to practice religious beliefs.  Indeed, as Masha acknowledges, although the three passionately believe in the issues they were speaking out about, they are not “ethically flawless”, and they do deeply regret the offense they inadvertently caused. 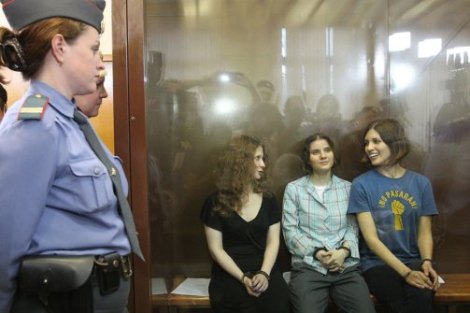 Masha, Katia, and Nadia converse with one another during a break while guards and the media look in. (Image borrowed from http://www.thedailybeast.com/)

The uproar from the Orthodox community is evidence that art, as Brecht asserts, can be an incredibly powerful thing.  The irony, of course, is that this film is not very Brechtian in that it is not very transparent or reflexive.  Brecht’s theatre was unabashedly didactic, and he advocated for theatre that revealed its artificiality in order to jolt the audience out of complacency and force them to confront the content.  Although Pussy Riot’s performances may be more in the Brechtian spirit, this film itself does not seem to be fully aware of its own potential as provocative performance.  (Despite kitschy elements like introducing the women – by first name only – as the “stars” of the film in the opening credits.)

The women themselves, however, are keenly aware of the performances they are constantly putting on, especially in the “horrific theater” of the courtroom.  At one point during a break in the trial, the women pass their time being sequestered in a glass box by joking and conversing with one another.  But they are aware of the media surrounding them, and begin to express concern over how the media will represent them looking happy and laughing.  One always has a role to play, and playing something unexpected can have an enormous impact, as this film exposes. 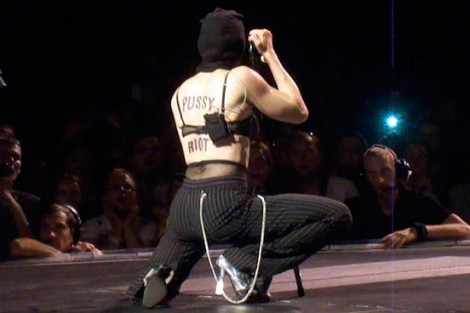 Pussy Riot has caught the attention of celebrity supporters from around the world. Here, Madonna shows her support for Pussy Riot during one of her concerts. (Image borrowed from http://www.nme.com/)

And what this film notably achieves is bringing these events to light and raising international awareness about oppression and human rights violations happening even in a place we may not have expected.  “Performance” will mean different things and wield different powers in different parts of the world.  While we work toward progress in the United States, we must not be ignorant of our friends in need of support in Russia.

One response to “Film Review: Pussy Riot: A Punk Prayer”