If you’re anything like me, you’re a little bit addicted to documentaries.  And maybe you have seen one particular film floating around your Netflix recommendations called Examined Life. Perhaps your interest was piqued by the celebrity-philosopher names splashed across the top, but you let the film gather dust in your queue anyway because you didn’t have the time or attention span for the academic content it promised to contain. Well, after finally getting around to watching it myself, I’m here to give you a rundown of what it’s all about and assure you that it is engaging, thought-provoking, and well worth the watch. 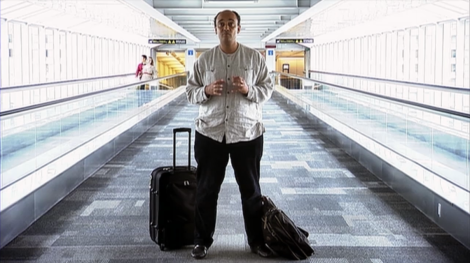 Kwame Anthony Appiah talking about cosmopolitanism in a Canadian airport

I’d go so far as to bet that you’ll get something out of this film whether you’re a doco buff, a dilettante philosopher, or even completely unacquainted with anyone in it.  One of this film’s greatest strengths is that it’s a pretty great primer to some pretty important issues– like how to live an ethical, meaningful, responsible life– from the perspectives of some pretty great thinkers. So even for those of you who do not already harbor big brain-crushes on the likes of Judith Butler and Slavoj Žižek, you will be introduced to some important ethical issues in an accessible and engaging medium.

Examined Life was released in 2008 by Zeitgeist Films, a company that aims to appeal to the “more discriminating and adventurous filmgoer”. The task of exploring the overwhelmingly broad topic of “philosophy” and packaging it in feature-length film format was taken on by director Astra Taylor, who also directed the 2005 documentary Žižek! Both films represent Taylor’s attempt to draw contemporary philosophy out of its perceived ivory tower and make it relevant to the layperson.

Taylor’s unique approach to this challenge is to place her subjects within uncommon or unexpected environments, which humanizes the theorists she highlights.  This technique is the marketed draw of Examined Life.  It is successful in making the dense content of the film exciting and relevant to viewers unfamiliar with the theories discussed, while making it newly poignant to those already familiar.

I found it particularly fascinating to watch these thinkers in action, to notice aspects of their extempore speech that I couldn’t have gotten from a polished printed work.  For example: the speed at which they articulate their thoughts, how they find and form their words, how they embody their status, and what in these busy settings catches their eye. And sometimes the settings are distracting, as when Avital Ronell interjects “excuse me” while walking in front of a long row of occupied benches, or when Michael Hardt’s contemplations are temporarily stymied by his accidentally steering his rowboat into a rock. On occasion though, the settings underscore and exemplify the content of the dialogue, such as when Peter Singer condemns reckless spending on 5th Avenue in New York City, or when Slavoj Žižek takes apart the ideology of ecology at a dump.

In many ways, the camera lens works to represent the viewer’s point of view in this documentary. Sometimes the film’s subjects look right at us, and at other times we are more passive observers implicated in the conversation. The film doesn’t try to polish and present authoritative teachers. Rather, it brings us into conversation with real people and allows us to notice seemingly inconsequential details about the environments. And just as Taylor attempts to show her subjects as they “really” are, she does not attempt to erase her presence from the filmmaking process. The presence you sense at your side when the subjects are not gazing into the camera is, in fact, Taylor, and her prompting questions are often heard from off-screen. Every once in a while, she will appear with the frame, too, as will the camera equipment, or its ghostly shadow.

In these moments, the film is a part of a documentary practice which film theorist Bill Nichols has coined the “reflexive mode”.  Reflexive documentaries reveal the aspects of the filmmaking process that are usually hidden, such as the director or camera equipment.  This is done in an effort to push the viewer to be aware of the filmmaking process and not to take the Truth (“capital T” as Cornell West would say) that is represented by a documentary for granted.

In the end, although I really enjoyed delving into the philosophical issues presented in Examined Life, that’s not the thing that made it such a good film.  What made it stand out to me is its unconventional structure.  When Taylor films her subjects speaking about academic subjects in nonacademic environments, it affects their statuses.  This is paralleled by Taylor’s reflexive techniques, which affect her own status as a filmmaker.  Both things prompt the viewer to actively engage with the material, not just passively absorb it.  Which invites the question, who is really authoring this film? There is no hypothesis clearly stated, nor resounding conclusion. I made these judgments and identified these connections on my own. And perhaps my reading of the film will be quite different from yours, informed as it was by my own prior encounters with these thinkers as well as with the problematics of the documentary genre itself. So I invite you to watch it, allow yourself to become mired in Big Questions (capital B, capital Q) and see what you learn from these prominent thinkers and what new questions the film’s structure prompts you to ask for yourself.