I was recently sifting through the bookshelves at an artist friend’s place, and while I was working through his art books, I encountered a lot of names that are pretty well known, if not ubiquitous- Degas, Michelangelo, Matisse, Bonnard, and so on. But I also found an exciting new guy (well, new to me, he’s been dead for two centuries) by the name of Ito Jakuchu. While I’m guessing he’s well known and influential in Japan, he’s probably pretty obscure over here in the U.S and I’m grateful for the stroke of fortune since I likely wouldn’t have found him otherwise. Anyway, Ito Jakuchu was a weirdo and I love him now. 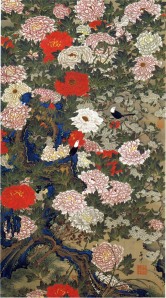 The internet sadly yields slim pickings in terms of quality-resolution images of his work, but this painting (called “Birds and Peonies”) was one of my favorites looking through the book. One of the things that really struck me about Jakuchu was that he flew in the face of a lot of what I believed about Japanese art. Most of the work I’ve seen by older Japanese painters tends to use a lot of negative space, conveying a sense of clear-headed serenity, but while the serenity is there in Jakuchu’s work, you have to dig deep for it. On the surface (not to mention several layers down), what you feel is a sense of being overwhelmed- by spiritual joy that’s somehow both rapturous and tranquil, and with natural beauty so vivid that it’s almost violent.

Like William Blake, Jakuchu was deeply religious- and I suspect he was deeply religious in a lot of the same ways Blake was, because his work has a lot of the same surreal semi-realistic and semi-allegorical quality that Blake has. Jakuchu’s painting is very Buddhist, but instead of quiet, it’s transcendent. This painting is beautiful enough at first glance, with the complex linework and sensual, vivid use of color. But then you see those little birds perched near the center of the painting, looking small, insignificant and even vulnerable in contrast with all the ferocious beauty around them, and it gives you a little bit of that night-sky feeling, that sense of how small we are in the scope of things but also how totally okay that is.

Then look just a little bit closer, to the bird on the right, and you see that his head is shifting- upside down and backwards, a sudden gesture, he didn’t even have time to turn around- to a little insect flitting between the flower stems and against the blank sheet of the print. And all of a sudden the vulnerable little birds look big, predatorial, and the sight of this smaller drama going on in the middle of the larger drama of flowers blooming vigorously makes you wonder how many more layers are involved here- what microscopic battles are being waged inside that little fly, and what epic tales are going on in the world beyond this little tree. All of a sudden, you’re mind is shifted outside the painting, to the grandeur and complexity of the world at large.

There’s also just something about the choices of colors here that makes the whole thing echo, to me, with a tenderness, with a love for the subject matter. There’s times- in my case, they’re usually in big cities and nature- where you’re overwhelmed by the life of the world as it goes about its business and you just want to give the whole interesting mess a big goddamn hug. It’s tempting to think Jakuchu was feeling the same way. 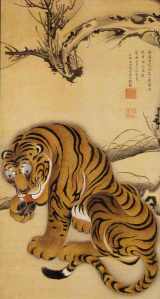 Another thing that really fascinated me about Jakuchu’s paintings was the way he anthropomorphizes his animals just a little bit, makes them seem kind of human but also alien and inscrutable in the way animals always do, with that distinctly non-human vibe they give off, that makes us feel like if cats could talk, they’d have broken grammar and use Z instead of S.

Take a look at this tiger. It’s fucking terrifying. Look at this motherfucker’s eyes. Those are the eyes of a tiger that just does not give a shit. Right this second, while off center, the message those eyes send is roughly: “Just chillin’, lickin’ my paw, you know”. But now imagine those eyes drifting just a little bit to the left, to look directly at you, the viewer. Terrifying, right? And yet weirdly innocent. There’s no malice in that tiger’s eyes. Just scary, uncontrollable, majestic, carnivorous power.

You can see it in the picture up top, too. The bird on the right is struck with sudden curiosity and temptation, looking at the fly that could be its meal. The bird on the left… almost seems like it’s wondering what his/her companion is looking at, like, “yo, dude, what’s up? What you looking at?” But of course, they’re birds, and the painting doesn’t quite anthropomorphize them- it just invites you to do so, captures that weird human temptation to do so.

One last thing about Jakuchu- A lot of writers and artists who convey a dreamlike quality tend to do so with the use of impressionistic flourishes and blurry, fluid boundaries (narratively as well as visually- Neil Gaiman’s writing, for example, is rife with talk about how the boundaries between this world and others, between myth and fact, are porous). But Jakuchu came out of a tradition that made use of precise, fluid linework and tended to fill spaces with solid blocks of fairly uniform color. So I think it’s cool how he can manage to capture that blurry, hallucinatory, dream-like feeling, but while still conveying the precision, solidity and elegance characteristic of Japanese painting.

Also, there’s another painting of Jakuchu’s that I really like, with two ducks, and one has its head underwater, and it’s great. And another one, with like a shitload of frogs all looking the same way. They’re super good but hard to find online, sorry.

3 responses to “I Look at Art and Stuff: The Paintings of Ito Jakuchu”