As I have become the modern version of “Hints from Heloise” (from Good Housekeeping) on this blog, I figured I would continue the trend and talk about doing laundry. I have a terrible relationship with laundry. Growing up in a home where we older girls were responsible for running the housekeeping tasks–the “women’s work”– I learned at a very young age to be very good at those tasks, and to perform those tasks with joy and delight (or at least to fake it). Laundry was an anomaly in that I never did learn to enjoy it, tolerate it, or even fake it well.

There were eleven people in my home growing up. We had one washing machine and one dryer, which meant that they were running almost around the clock just to keep up with the laundry needs of my family. We had a mountain of folding to do every single day. Heaven help us around Thanksgiving and Christmas, when there would be more laundry from the inevitable spills from cooking, baking, and canning. My sisters, mother, and I would spend most evenings after the babies were in bed sitting in the living room talking and folding and sorting the mountain of laundry that needed tending. On Wednesday nights, if we were feeling rebellious, my mother would get out her small 4-inch television that was hidden in the spice cabinet and we would watch Law and Order while we folded. Independent Fundamentalist Baptists don’t fill our minds with the evil that is television – except when we do. Also, if we are going to do something or discuss something that we don’t want to deal with the men about, we will do it in a space where we know they won’t come. No man would dream of folding laundry with us. The company was glorious, but the actual work, not so much.

With many loads running, and without an industrial dryer, we were frequently forced to use the clothesline outside to get everything dry. We had ten clotheslines hung on our property just so we could accommodate everything when the inevitable broken dryer occurred. All that to say, I am no stranger to back breaking laundry duty. But doing laundry Ghanaian-style truly takes the cake.

Ghanaian laundry in the rural north is done by hand from start to finish. In fact, it is nearly impossible to find laundry soap in Bimbilla that could work in a washing machine, even on market days. The most readily available laundry soap is called MOK washing powder, and is specifically designed to be used in hand-washing clothing. 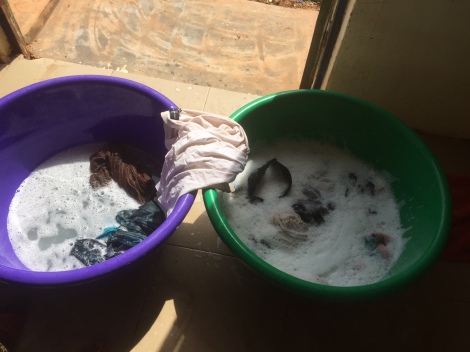 Washing clothes requires two to three large basins full of water. In one basin, the laundry soap is dissolved into the water and the clothes are placed in the soapy water to soak for fifteen minutes (per the recommendations of the laundry soap manufacturer). Clothes are sorted by color, but this is not as much of an issue as it is when you are using a washing machine.

After the clothes have soaked for fifteen minutes, most of the dirt, dust, and grime have dissolved straight into the water. A bar of soap is then used to scrub any remaining areas of concern. After the clothes are clean, they are plunged into and out of the soapy water and generally agitated several times to get as much of the soap and dirt out of the clothes as possible. The clothes are rung out, and then moved on to the next basin full of clean rinsing water.

In the next basin, the clothes are agitated and rung several times to get any remaining soap and dirt out. If clothes are particularly soapy at this stage, they may be rinsed under running water. However, this is rare, as many homes do not have running water. Also, this is wasteful of water and water is a precious commodity here. When the clothes are as soap-free as possible, they are transferred to the third basin.

The third basin of water is also rinsing water. It is here that the clothes will be completely rinsed before they are hung out to dry. As in basin number 2, the clothes will be agitated and rung several times before being examined for any remaining dirt, grime, or stains. If the clothes are still dirty, they go back to basin number 1 and the process is repeated. If the clothes are clean and relatively soap-free, they are rung out until they are as dry as possible, then placed on the clothesline to dry. Interestingly enough, it is considered a man’s responsibility to string and maintain the clothesline here in northern Ghana, while it is considered the woman’s responsibility to do the laundry. Our neighbors were shocked and scandalized when I strung the clothesline for our home because of my previous experience. In fact, they came and scolded Matan, a male volunteer who was watching me, for putting a woman like myself in the position of having to hang her own clothesline.

Laundry is most commonly done early in the morning here. This allows the clothes to be hung on the line and dried in the sunshine, which does kill many kinds of bacteria. It also allows the clothes to become dry before evening, when they are commonly taken off the line. I have interviewed several of our neighbors for this piece The women I have talked to all concur that they enjoy doing the laundry early in the morning for these practical reasons and also because it takes so much energy, and so it is best to get it over with first thing. Many women take their laundry straight to a water source, such as a river or borehole. This way, they do not have to fetch such a large amount of water to their homes, which may be several miles away from a water source. If this is the case, the laundry is often spread out on the grass to dry while other laundry is being done. Many women will go together to do laundry on the same day, as this both lightens the workload and provides the distraction of company while doing this most odious of tasks.

I have now attempted to do my laundry myself three times since I came to Ghana. The first time, it took me more than three hours to do two loads totaling 65 pieces of clothing. I was shaking by the time I was finished, and vowed never to ever do my own laundry again while I was here. As I was thinking about what to write for this blog, I decided I would eventually write about doing laundry, so I decided to try again. The second time was even worse. It took me four hours, and I did it while simultaneously cooking dinner. I washed two loads, totaling 70 pieces of laundry, and I was again shaking by the time I was done. My water needed to be changed between the first and second loads, and I was shaking so bad that I dropped the water I was trying to dump long before I got into the yard. Our walkway was flooded. I had to have assistance in getting the water for the second load out onto the porch, and in dumping the water from the second load of laundry. I was unable to do anything the rest of the day, and was in bed most of the next day as well. My mistake was in waiting until evening to do my laundry. Also, that laundry was particularly dirty and required extra scrubbing.

I am happy to report that the third attempt at doing laundry went much better. I did it early in the morning, it took me three hours to do two loads totaling 63 pieces, and I was able to handle all of my own water. I was shaking by the end, but not nearly as badly as the other two attempts. Laundry was the only thing I did that day, but I was proud of myself.

We have hired a local woman who owns several businesses to be our laundress. It is a way that she and her sister can earn extra money to support the sister’s education. She is able to do two loads of laundry in 1.5 hours, and is not shaking by the time she is finished. When I asked her how long laundry typically takes her and how she feels afterward, explaining my experiences and this piece, she was very amused. Apparently, most foreigners try to do their own laundry and eventually give up and hire local women because it is too difficult. I began hiring my laundry after the first attempt to do it myself, but every now and then my pride and my pocketbook compel me to make another attempt at this domestic art. Also, when I decided to write this piece, I wanted to see how my skills stacked up against the experienced women of Ghana. I wanted to make sure my data set was more solid than one sorry attempt.

I am ashamed to admit that I have finally found a domestic art that has so thoroughly and convincingly kicked my tail. I will continue to have my laundry done, both because it is a way to financially support local women, and because doing laundry by hand is so incredibly, amazingly difficult. I have nothing but admiration for the amazing women of northern Ghana who are able to do this difficult work while also doing everything else they have to do for that day, including fetching water and carrying it back to their homes for their daily needs. That is an amazing accomplishment, and needs to elevated from its common and undervalued status as invisible “women’s work.” 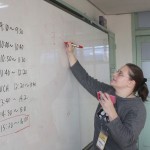 Rebecca Czekalski has taught in the science department of a dual language international high school in South Korea for the last five years. During that time, she has co-authored the school’s AP Biology and AP Chemistry curricula, collaborated on science- and English-themed camps for Korean elementary schools, and launched an annual science fair for her students. Before moving to Korea, Rebecca was a registered nurse for eight years, specializing in cardiac nursing, and a travel nurse for two years. Rebecca’s interests in other cultures and serving people have made her time in Korea rewarding both personally and professionally, and she looks forward to continuing her journey in Ghana. Rebecca has been a secular humanist for three years.

One response to “The Worst Chore on the List”