After living in a Malawian village for a year, I find myself in the doctor’s office just three days after my return home to California. My mother is worried I’ve brought home some kind of weird disease. “Have you been out of the country in the past three weeks?” the friendly woman behind the reception desk asks me. She wants to know if I’ve been exposed to Ebola. “I’ve been living in Malawi,” I say. “Oh!! Maui must be so nice this time of year!” she exclaims. “I’ve always wanted to go to Hawaii”.

I grin. I’m back in America.

Something I’ve been thinking a lot about since I got back is how dreamlike my entire year in Malawi feels. I’ve found little ways to tie myself to Malawi: my adopted kitten, pictures, writing…but back in Connecticut, some parts of my time in Malawi seem so crazy they don’t seem real anymore. How can I connect Malawi to my current life and carry my experiences forward?

For example: witchcraft. Flash back to Malawi. 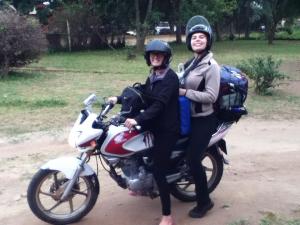 For those of you who may not know, I have a motorbike. A 125 cc Honda manufactured in South Africa with red and white detailing, a kick starter, and a good chunk of my love. Unfortunately, I keep getting flat tires. When I ask Ishmael (my go-to “fix-it” man and good friend) what my trouble is, he immediately tells me, “It is witchcraft” and suggests I see an herbalist. I probe a little more. It transpires that Ishamael’s father was killed by witchcraft.

The cost of killing a man is about 3000 Malawian kwacha or $7, and Ishmael goes on to discuss women who have delivered non-baby objects (most frequently stones) because the witches have been playing with them.

One late-night drive back from the wildlife sanctuary in Lilongwe, my taxi driver, a chatty, genial fellow named Mike, informs me how prudent it was to take a taxi. “Ordinary hyenas are very afraid and you have no fear of them” he says, “We only must be afraid of hyenas who are really people. In the villages, where witchcraft is practiced, people can turn into hyenas, snakes, or other animals to steal at night”. I of course, live in said villages, and tell Mike so. He clucks concernedly and tells me to be careful and always lock my door at night.

Thinking these conversations represent a limited population of believers, I chat to my Lilongwe friend Jessica, a wealthy, government-employed Malawian who has traveled extensively internationally. Rather than laugh it off, she ups the ante. “These people” she says, “Are bad and want human blood. Sometimes they make people disappear; sometimes they just suck all the blood out of a person and leave their shell behind. Sometimes they may sleep with you without you knowing and your only clue is that you wake up feeling sick or tired.”. She goes on to express concern that her youngest daughter is away at boarding school where she fears witchcraft may happen without her knowing. “But we are safe with God,” she concludes.

Witchcraft is also an integral part of my own research. As it has been explained to me, witchcraft is mostly practiced because of jealousy, especially from one’s neighbors. If you believe that a witch is playing with you, you should immediately see a traditional doctor or herbalist. The traditional doctor may be able to tell you who’s witching you and also provide medicine to protect you. Because children are so highly valued in Yao culture, pregnant women are often targets of witchcraft. In my interviews, I most frequently encountered stories of witches who have made a pregnancy disappear, induced a miscarriage, or prevented a woman from getting pregnant. Interestingly, there is a lot of overlap between witchcraft and the complications that can result from malaria in pregnancy: premature birth (birth before 37 weeks of pregnancy), low birth weight, restricted growth of the baby in the womb, stillbirth, miscarriage, and even death of the mother.

Because Lungwena is a malaria-endemic area, malarial risk-perception, prevention methods, and treatment-seeking behavior are essential to the health of a mother and her growing fetus during pregnancy. If symptoms are recognized as malaria, a pregnant woman will generally travel to the health center to receive treatment. However, the primary indicators of malaria are fever, body pains, and anemia, which I have found are almost universally attributed to the effects of too much sun. According to Yao belief, too much sun can give you fever, cause you to lose all of your blood (which is best replenished by drinking cherry flavored Sobo), and cause essentially all of the known symptoms of malaria.  With malarial symptoms attributed to too much sun and malarial pregnancy complications attributed to witchcraft, it becomes difficult to ensure that pregnant women are able to receive appropriate malarial prevention and treatment.

This gets at the crux of my research for the year: theoretically, everything is in place to ensure that not a single mother has malaria in pregnancy. At the Lungwena health center, a pregnant mother can be given free treatment to clear the placental sequestration of parasites, a free mosquito net to prevent new malarial infections, and an iron supplement to minimize the risk of anemia. However, in practice, almost every mother in Lungwena has malaria at least at some point during her pregnancy. It has been my goal to find out why and what can be done.

I am sitting writing this piece back at my desk in Connecticut, USA—a setting that seems in a different universe from my village life in Malawi. I have air conditioning, a surplus of functioning pens, a comfortable chair, and my lunch costs between three to ten US dollars—money that could have fed me for a week in Malawi. I find myself feeling very sentimental. I think back to drowsy weekends at the lake with my motorbike, a surplus of sunshine, warm sand to fall asleep on, and clear, warm water to dive down in and look at the colorful fish. I’m afraid without anyone to practice with that I will forget my Yao, or lose parts of me that grew up in Malawi. I have lived so much since that day in August ten months ago when I stepped off the plane for the first time in Africa. When the nine-hour time difference made sleeping impossible and found me awake at all hours tearfully looking at pictures from home, watching Forrest Gump and feeling very small and alone. I don’t remember what I imagined for this year, but I’m almost happy I didn’t know what was in store. Through all the ups and down, I know I wouldn’t change a thing. Thank you Malawi, you helped me feel alive.

A native of Berkeley, CA, Claire has always had many interests and passions–people being one of them. She grew up juggling and unicycling, riding horses, waterskiing, and roaming the hills and beaches of the Bay Area. One auspicious summer, Claire discovered molecular biology and has never looked back. She received her degree in the subject from Yale in 2014, and is now spending a year researching malaria in pregnancy in a tiny village in northern Malawi. Claire is new to Humanism, but hopes to use her love of people and stories to expand her thinking, especially through her work with this blog. Claire loves to receive emails, especially regarding thoughts about her writing and other stories.