“I don’t want to hear the ‘Man Was Not Meant to Meddle’ medley” is a sentiment you don’t often hear from the hero of a sci-fi movie. It’s also a high point in one of the most perfect unions of a writer, Joss Whedon, with a character, Robert Downey Jr.’s Tony Stark. Usually the hero is the one saying something like “Stop trying to play God!”, and I found the opposite refreshing, even if Stark does accidentally create the titular villain of Avengers: Age of Ultron. Later Stark also creates the Vision (Paul Bettany), the partly organic, inscrutably powerful, morally unassailable android who arguably saves the world. So for those of us interested in transhumanism, artificial intelligence, and the rational acceptance of GMOs, what’s the take-home lesson of what will almost certainly be the second-highest grossing movie of 2015?** Is it Man was not meant to meddle? Or Go ahead and meddle, just in case? 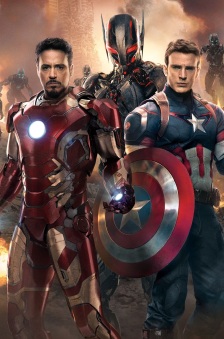 Stark’s meddling is prompted by post-traumatic stress over the attempted Chitauri invasion three years ago, when an army of aliens spilled through a wormhole above Manhattan. Convinced that Earth needs a mightier line of defense than even the Avengers, he envisions a world-shielding legion of robots controlled by a benevolent and vigilant artificial intelligence. “What if the next time aliens roll up to the club—and they will—they can’t get past the bouncer?” Unfortunately, Stark instead produces a superpowered robot who decides the best way to save the world is to depopulate it and let life start over. Ultron (James Spader) characterizes this as forced evolution, in a scene where he’s building himself a new body: tougher, sleeker, capable of more graceful flight and explodier laser blasts.

This framing suggests that Ultron thinks evolution means Harder, Better, Faster, Stronger. But if it did, cockroaches and sharks would not be its greatest triumphs. “Survival of the fittest” doesn’t mean survival of the strongest or most complex. It means survival of the organisms best suited to their particular environment. And “best” doesn’t mean “best possible,” but “best of all the things that have just accidentally happened.” Our bodies are the best nature has done for us, but in many obvious ways they could be better. This is why the idea of intelligent design is so silly, and why I’ve always found “playing God,” as a criticism, to be a little incoherent: if we are designed, it is certainly not intelligently.

So when Ultron talks about forcing humans to evolve, what he should really mean is forcing humans to surpass evolution—to leave chance behind and take responsibility for defining the “fit” in “survival of the fittest.” And this is indeed Stark’s point. When he defends his idea to the other Avengers, he observes that they “can bust weapons dealers the whole doo-da-day,” but somewhere out there are threats that humanity cannot yet anticipate or withstand. It is true not only for the Avengers but in real life that unless humans reach far beyond our current capacities, never mind our baseline “natural” powers, we will almost certainly either destroy ourselves or eventually be wiped out by some indifferent force like supervolcanoes or an asteroid. Avoiding extinction means doing much more than we were ever “designed” to do.

But of course you’re not a Luddite for suggesting, hey, let’s maybe be careful with untested technologies that could have massive ramifications. Ambitious projects intended to elevate humankind often end very badly. In Age of Ultron this is driven home by another product of mad science, Steve Rogers/Captain America (Chris Evans) himself. Early in the movie, he makes clear that he doesn’t think it’s unethical for two antagonists to have, like him, volunteered for experimental enhancement in service of a greater good. In his case, the greater good was defeating yet another project in ostensible human uplift: Hitler’s Nazi Germany. So Cap — the moral center of the Marvel universe, at least until the end of this movie’s second act — is not in principle opposed to all human intervention in the course of “natural” events.

This should be kept in mind around the midpoint of Age of Ultron, when Stark argues with Rogers about his good intentions. Where Rogers, the soldier, accepts as a matter of course that it’s the responsibility of the Avengers to take on crazy threats, Stark understandably wishes no one would have to — that they could someday not need to be the Avengers anymore: “Isn’t that why we fight? So we can end the fight? So we get to go home?” Rogers replies: “Every time someone tries to win a war before it starts, innocent people die. Every time.”

He’s not wrong. As individuals and as a species alike, humans make the same mistakes, over and over. But does learning from our mistakes really have to mean saying, “Well, that went wrong once, so let’s never, ever try anything like that ever again”? Does being fallible mean we should simply abandon utopian endeavors? Maybe it’s true, in a cosmic sense, that we are not as a species entitled to survival. But what’s so bad about wanting to decide for ourselves a destiny that’s brighter than extinction? What’s so bad about wanting to try something again that’s failed, and hoping we can do better?

I don’t have a real answer to this. Neither does Joss Whedon. But he’s always had a knack for giving both sides of a philosophical argument in his fiction a fair shake. Here, the counterargument to Ultron is Stark’s do-over, the Vision. The Vision is a combination of Ultron’s replacement body, a powerful “Infinity Stone,” and the software of Stark’s loyal AI butler, JARVIS. Upon his “birth” the Avengers are wary of him, but in a twist that even in this spoiler-tagged post I would hate to ruin, he quickly and indisputably proves his purity of intention. Stark is proven right: the Avengers, and by extension humanity, can’t go it alone. The Vision is instrumental in defeating Ultron. And then, the two AIs have this conversation:

Ultron: Stark asked for a savior and he settled for a slave.

Vision: I suppose we’re both disappointments…. Humans are odd. They think order and chaos are somehow opposites, and try to control what won’t be. But there is grace in their failings. I think you missed that.

Vision: Yes. But a thing isn’t beautiful because it lasts. It’s a privilege to be among them.

Vision: Well, I was born yesterday.

“They’re doomed.” “Yes.” I actually love this exchange, or at least I appreciate that it accompanies the more common sci-fi movie refrain of, “Oh, humans are so plucky, and gosh isn’t their failure endearing?” Because the only people who’ve ever said this are, you know, humans, I’ve always found it annoyingly self-congratulatory. Or perhaps a bit too self-forgiving: we haven’t done better so we assume we can’t — and don’t have to.

Whether cocky or short-sighted, when people fret about “playing God,” the implication is sometimes a creationist belief that we’re perfect just the way we are; there’s a smugness, a complacency, to it. But when Whedon admits, through the Vision, that we’re doomed, the message can’t be otherwise than of humility. And that at least leaves room for improvement.

Kris is a screenwriting MFA student at DePaul University. Previously he studied philosophy at Colby College and the University of New Mexico. In theory his research interests were existentialism, ethics, and Buddhism, but in practice this translated into writing about skill, superheroes, and friendship. Kris mostly still writes about those things, and in flashes of foolish optimism likes to think this might land him a job on CBS’s Supergirl. Kris also likes: yoga, the Lincoln Memorial, Bioware video games, Heather Havrilesky’s advice column “Ask Polly,” the music of Sara Bareilles. He’s mostly retweeting culture critics and professional feminists @krismiranda09.