Its Monday, and I have just found a seat on Caltrain for the morning commute. It is common for trains to be delayed. But my heart sinks every time passengers are informed to expect a delay of more than 15 minutes. This is one of those times. A quick glance at my twitter feed, and a familiar message comes up on the screen.

Caltrain officials say teen boy was fatally struck by train after he intentionally walked onto tracks in Palo Alto. http://t.co/FyYc2xc5lZ

A little more than an hour ago, a young man died on these train tracks. Looking around at my fellow commuters and I wonder whether they too are aware of this fact. Do they realize a life has been lost? Do they care?

This morning’s occurrence marked the second teenager in 4 months to be struck by a train. Another man stepped in front of the train earlier this week. Such collisions occur more than a dozen times a year in the San Francisco Bay Area. The Federal Railroad Administration reports that in the U.S., there averages 300 to 500 train suicides a year. These people are on the train tracks by choice…consciously seeking a quick death. 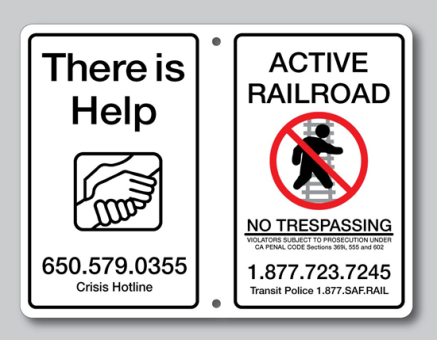 Recently, I attended a workshop that my department had coordinated on campus for students and professionals. Our entire staff was in attendance for a training on QPR: Question, Persuade, Refer. Similar to CPR, QPR is an emergency response to someone in crisis and can save lives.  “QPR uses a “chain of survival” approach in which the gatekeeper learns to recognize early suicide warning signs, Question their meaning to determine suicide intent or desire, Persuade the person to accept or seek help, and Refer the person to appropriate resources.”

MYTH:  Depression may be the best predictor for suicide risk.

Q is for QUESTION

QPR first focuses on recognizing key indicators of suicide ideation. Such indicators include exhibiting a sense of hopelessness, despair, shame, or humiliation. Individuals may have recently experienced a crisis, started giving away prized possessions, or have a sudden interest or disinterest in religions. Risk of suicide is higher when a person feels they are a burden to others, or exhibits a lack of belonging and social alienation.

“Does it sometimes feel like life is not worth living?”

In the training, we had the opportunity to role play scenarios where we asked difficult but straight forward questions. Although most of us may want to avoid such conversations, its important that they take place. We cannot afford to take a ‘wait and see’ approach to other people’s lives.

FACT: ‘Successful people’ who become suicidal are often unable or unwilling to ask for help because of the stigma and shame associated with “being weak.”

P is for PERSUADE

When encountering someone who may be considering suicide, the next step should be to persuade them to find help. While you may not be a health care professional or counselor, you can commit to being with this person until they have received the sort of assistance they need at this time. Ask questions such as:

Will you go with me to get help?

Your willingness to listen can rekindle hope and make all the difference to the person at this dire time.

FACT: Some communities face a higher risk for suicide.

R is for REFER

The final lesson in QPR focuses on how to refer individuals to helpful resources. This step requires a person be proactive, by seeking out a network of support, be it family, friends, colleagues, community leaders or health professionals.

Sadly, I was only thirteen when my life was first affected by suicide. My cousin, at the young age of sixteen, chose to take his life. He was gay, and this was a truth he could not live with. His death is one of the reasons I found my way to the intersecting fields of humanist activism, interfaith chaplaincy, and community building. I actively seek to create spaces where people can feel safe to be themselves, as well as opportunities for unlikely but necessary conversations to take place. I want those who have been treated unjustly, those who were denied the love they deserved, and those who have simply forgotten, to know that they are loved.

YOU ARE LOVED and there remain so many possibilities for you in this world.

Vanessa is Co-President of the San Francisco Bay Area Humanists. Currently, she serves on the Board of the North American Interfaith Network, and is on staff at Stanford University’s – Office for Religious Life.  Previously, she worked at The Chaplaincy Institute, An Interfaith Seminary in Berkeley. Vanessa holds a M.S. from the School for Conflict Analysis & Resolution at George Mason University, and bachelor degrees in Psychology and Religious Studies from Arizona State University. In 2014, she graduated from The Humanist Institute‘s – Leadership Graduate Certificate program.