With the religious rights’ stranglehold on the Republican Party, the results of the mid-term elections left few friends of secularism in Congress. The so-called “party of no” got straight to work introducing a number of very troubling bills in the first week of the 114th Congress, including six anti-abortion bills.

But the buck doesn’t stop at Congress. Some of the most egregious legislation is coming out of state legislatures, which can hold a lot of sway when it comes to issues like reproductive rights and end of life choice.

No. 1: Attacks on Reproductive Rights

On the first day of the new session of Congress, Representatives Trent Franks (R-AZ) and Marsha Blackburn (R-TN) reintroduced a bill that would ban abortion after 20 weeks into a pregnancy. The bill, called the Pain Capable Unborn Child Protection Act, is named for the “fetal pain” claims anti-choice activists make to justify restricting abortion. This argument is not backed by scientific evidence, and has been debunked by multiple studies. In fact, the Journal of the American Medical Association conducted a review of studies on fetal pain, which decisively concluded ”evidence regarding the capacity for fetal pain is limited but indicates that fetal perception of pain is unlikely before the third trimester.”

The “fetal pain” bill was purposefully scheduled for a vote on the 42nd Anniversary of the Roe v. Wade decision and the “March for Life,” but was scrapped due to opposition from Republican women who found its treatment of rape victims too extreme. The bill would have only allowed victims who reported their rapes to the police to qualify for an abortion. In its place the House passed a bill restricting federal funding for abortion, which is already restricted. Senator David Vitter (R-LA) introduced an additional four anti-choice bills that would, respectively: de-fund Planned Parenthood, make hospital admitting privileges mandatory for all abortion providers, permit health care providers to deny women abortions, and prohibit abortions allegedly based on the sex of the fetus. The frosting on the cake for this multi-pronged assault on reproductive choice was Representative Jeff Duncan’s (R-SC) bill that would mandate women to go undergo an ultrasound before getting an abortion.

Anti-Choice Tactics in the States

Anti-choice activists use a variety of tactics to assert their agenda via bogus regulatory laws, restrictions on state funding,  “personhood” bills, attacks on private health insurance plans, and in the last election, ballot initiatives. As demonstrated by Congress’ switch-out from one bill for another, the anti-choice movement is pretty much throwing every tactic it can think of at the wall to see what sticks, and has had unprecedented success in the past few years. According to the Guttmacher Institute, more state restrictions on abortion were enacted between 2011-2013 than in the entire previous decade combined. 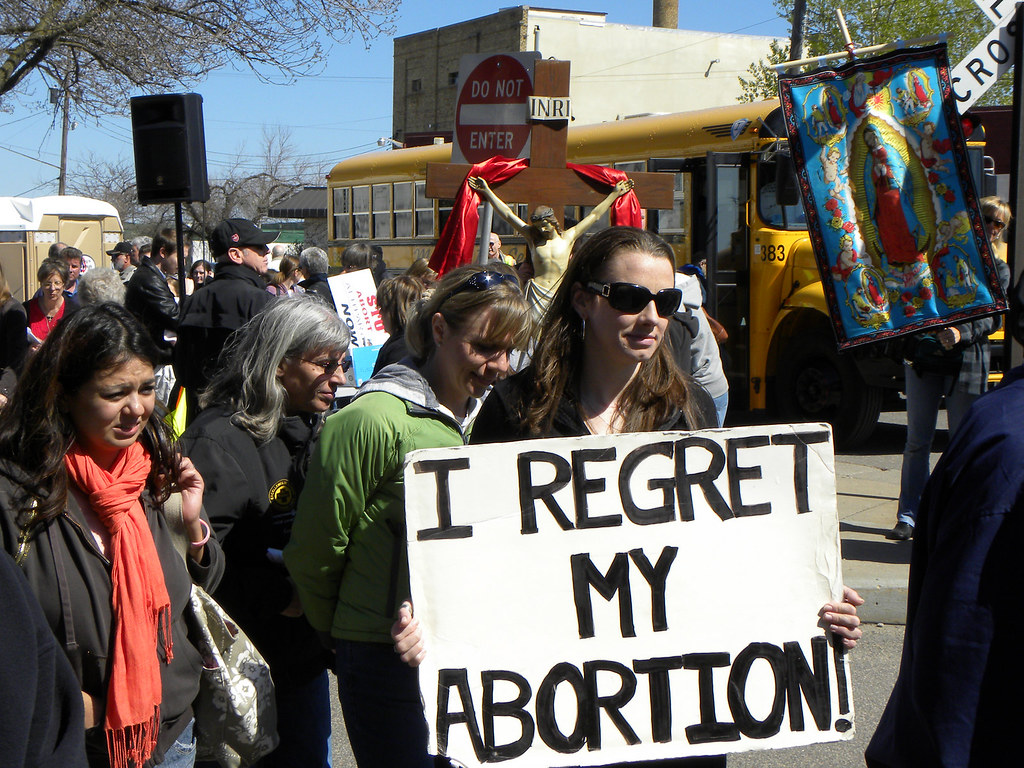 Anti-choice protest outside of a Planned Parenthood.

In states that have already all but eliminated access to abortion, there are now efforts to remove women’s last resort –telemedicine. Women in rural areas or in states with limited access to reproductive health services often use telemedicine to get medication abortion. Arkansas passed a law on February 12 banning telemedicine, becoming the seventeenth state to do so. A similar ban was introduced recently in Idaho. Targeted Regulation of Abortion Provider (TRAP) laws, quite literally “trap” abortion clinics into a regulatory dilemma, mandating them to meet medically unnecessary and expensive standards. These regulations, under the guise of “protecting women’s health,” have effectively closed down abortion clinics in several states, including nearly half of providers in Texas. In November, Colorado, South Dakota and Tennessee had “personhood” measures on the ballot that would define life as beginning at fertilization and effectively making abortion illegal. While these measures were defeated in Colorado and South Dakota, it unfortunately passed in Tennessee. Emboldened by their victory in Tennessee, we can expect to see “personhood” bills being introduced in state legislatures and put on the ballot in the next election. Beyond abortion access, there will continue to be attacks on employee insurance coverage. In a recent case, a car dealership in Minnesota was granted the right to deny its female employees health insurance that includes contraception. Expect to see more cases like this, as religious employers have been granted the right to discriminate by the Supreme Court’s devastating decision in the Hobby Lobby case, which gave private corporations the right to exercise religious beliefs on its employees.

Secular activists, advocates for reproductive justice, and the LGBT community were reeling last June when the Supreme Court handed down its decision in the Hobby Lobby case, concerned that the decision would be used to justify discrimination.

The law upon which the Hobby Lobby decision was based on is the Religious Freedom Restoration Act (RFRA). According to Nick Little, Legal Director at the Center for Inquiry, the original intent of the law was to protect individuals, not groups (let alone corporations) from undue burden on their religious beliefs. “For example,” he says, “a Native American being allowed to ingest peyote as a religious sacrament doesn’t burden anyone else.” Hobby Lobby, Little argues, went too far. “For the first time, the Court said that RFRA required exemptions to be given to religious groups, where granting that exemption removed a right that other people had.” In an Issue Brief published by the American Constitution Society, Professor of Law and expert on the First Amendment Caroline Mala Corbin argues, “recognizing corporate religious liberty will benefit employers at the expense of their employees, who risk losing protection of the employment laws as well as their own free exercise rights.” The battle against religiously based discrimination is looking grim. Although there was an attempt in the last Congress to roll back the damage of the Hobby Lobby decision through the Not My Boss’ Business bill introduced by Senator Patty Murray, it is unlikely this legislation would pass in the current Congress if reintroduced. With the blessing of the Supreme Court, we can expect to see RFRA introduced in a number of states this year. Little is concerned that some states will pass even more extreme versions of RFRA that would lower the threshold for what is considered a “substantial burden” on religious practice:

“The federal law requires a plaintiff to show a substantial burden on religious exercise in order to get an exemption. Some state laws omit the word “substantial,” with the effect that a religious person could claim the right to refuse to obey any law that had the slightest impact on their religion.”

According to Little, a few states have even introduced legislation affirming the “right” to discriminate, typically against the LGBT community. These laws, Little explains, would “specifically allow people to refuse to provide service to people based on their sexual orientation or gender identity, if providing such service would offend a person’s religious sensibilities.”

No. 3: Death with Dignity

According to Gallup, seven in ten Americans support end of life choice. When people were asked the same question using the less neutral term, “assisted suicide,” the percentage dropped by 11 points but still retains support from the majority of Americans. After Brittany Maynard’s story captured national headlines last year, the death with dignity movement has gained some ground. The Canadian Supreme Court’s unanimous decision to strike the ban on end of life choice earlier this month is also expected to give the movement in the U.S. an additional boost.

Death with dignity legislation passed New Jersey’s General Assembly in November. Its companion bill in the Senate has stalled and Governor Chris Christie has vowed to veto the bill. Symbolically, a death with dignity bill was introduced in California, the home state of Brittany Maynard where she had to uproot herself from to seek end of life choice in Oregon. Similar bills have also been introduced in Alaska, Iowa, Kansas, Maryland, Missouri, Oklahoma and DC. The Maryland bill in particular will be a major focus of death with dignity advocates this year, as former Maryland lawmaker Richard “Dick” Israel, has agreed to be the face of the campaign. The bill is named after Israel, who suffers from Parkinson’s disease and is currently unable to leave his hospice. End of life choice is a state-by-state issue, and is officially legal in Oregon, Washington, and Vermont. End of life choice has been deemed legal by lower courts in Montana and New Mexico, where a challenge is pending. There are two major organizations advancing the cause of death with dignity in the states: the Death with Dignity National Center and Compassion & Choices (C&C). On the non-political side, organizations like The Conversation Project and Death over Dinner seek to normalize the process of discussing end of life options with loved ones in a way that is focused on compassion and self-empowerment.

The stakes in the political arena are high this year. There is much room for optimism for end of life choice advocates, who will likely continue to build on their momentum, gain more victories in the states, and lay the foundation for future successes in others. Death with dignity already has broad public support, but the massive funding of the Catholic Church remains the primary obstacle to its legalization. Secular advocates for end of life choice can help by volunteering for Compassion & Choices’, and raising awareness by inviting C&C speakers to speak to local secular groups.

Advocates for reproductive choice will likely be on the defensive fighting anti-choice bills in this Republican Congress and further attacks on choice in the states. This year, it will be critically important for supporters of reproductive rights to stay engaged politically, supporting champions of reproductive justice like Planned Parenthood and standing up against attempts to de-fund it. With this Congress unlikely to overrule the Supreme Court’s decision in the Hobby Lobby case, it certainly seems like there is little the secular movement can do to reverse the inevitable consequences. Well, desperate times call for desperate measures, and it may be time to give the religious right a taste of its own medicine. On the heels of the Hobby Lobby decision last year, the Satanic Temple claimed an exemption from “informed consent” laws, claiming that such laws violate the religious liberty of Satanists. They encourage women who share their “sincerely held belief” in the right to scientifically accurate medical information to fill out a letter on their website to give to their care-provider. They will therefore be exempt from receiving “informed consent” materials that often include biased, inaccurate information intended to dissuade women from going through with their abortion. The Temple has vowed to sue if and when a woman who does so is denied an exemption. Similarly, a Unitarian Universalist ministers and General Synod of the United Church of Christ filed a lawsuit against the state of North Carolina over its gay marriage ban. The lawsuit claims the ban violates their religious freedom by preventing them from marrying same-sex couples. This is the time, if ever, for the secular movement to align itself with progressive religious leaders and demonstrate to the religious right that its version of “religious liberty” can cut both ways.

Sarah is a secular activist living in Washington, D.C. She graduated with a degree in International Studies from American University (AU), where she was a student leader of the AU Humanist Community. Passionate about separation of church and state and grassroots political activism, she dedicates her spare time to supporting local student groups as the Secular Student Alliance’s Volunteer Network Coordinator for the Washington area. You can follow her on Twitter @1line1amendment.  The views expressed herein are her own and do not reflect those of any organizations with which she is affiliated.