Recently, the proposed “black mass”at Harvard University caused quite a stir.  Catholic groups have expressed concern over whether a consecrated host will be used, or whether the entire event is anti-Catholic in nature.  I, for one, think it has little to nothing to do with anti-Catholicism.  It seems more likely that certain groups have turned this complicated ritual and its re-enactment to their benefit.  Unfortunately, even Harvard University has taken this bait.  Its official response reads,

“The ‘black mass’ had its historical origins as a means of denigrating the Catholic Church; it mocks a deeply sacred event in Catholicism, and is highly offensive to many in the Church and beyond.”

When it comes to the history of the black Mass, it is a shame to see Harvard embracing such an unsophisticated view.

For one, the “historical”black mass was, as many scholars agree, largely a construct of witch hunters and demonologists rather than actually practicing Satanists and witches.  There is little evidence to suggest that actual black masses were ever practiced.  All of the information that we have referencing black masses was obtained under conditions of extreme torture and the threat of death.  Torture victims probably constructed hyperbolic situations, which involved an inversion of what they knew to be sacred—the Mass—and what their religious torturers demanded of them.  If the Mass is the most sacred event, then of course the devil would want to mock that.  The black mass served as a discursive tool of those who sought to justify their persecution of various, often marginalized, individuals (such as elderly women, widows, gypsies, homosexuals, etc). 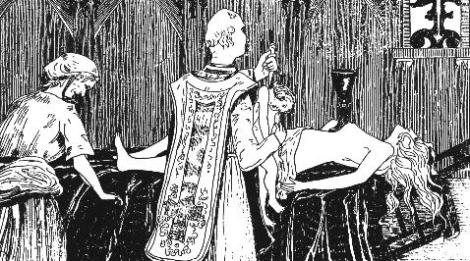 Secondly, there is the black mass of Anton LeVey and modern day Satanism.  LeVey, who himself claimed to be an atheist and did not believe in the supernatural, said that the black mass of his Church was drawing on the black Mass of previous traditions.  He felt that the “traditional”black Mass was symbolic of cultural subversiveness.  This was this image he wanted to draw inspiration from.  So he kept the Mass name and basic structure, but reworked the ritual to suit his Satanist ideology.

Slippery Slopes in Who’s Mocking Who

Now please forgive my slippery slope, but I wonder whether a Protestant service might not be considered a mockery of the Catholic Eucharist?  It draws upon elements once present in the traditional Catholic Mass, and even some Protestant Churches refer to their service as a Mass (Episcopalians and Anglicans).  Does the Roman Catholic Church have a monopoly on the “Mass”and the rituals of the Mass?  At one time, the Catholic Church would have openly referred to Protestantism as satanic or under the influence of the devil (and vice versa).  Should Harvard be issuing statements of apology for allowing Protestant communion services on their campus? 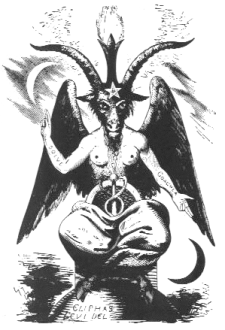 I must state that I am not endorsing religious “bigotry”or anti-Catholicism.  I, myself, was once Roman Catholic and I have a deep admiration and fond feelings for Catholicism.  However, I do not think that this event at Harvard was an example of anti-Catholicism.  On the other hand, I especially oppose a liberal arts university accepting a historically biased understanding of a complicated religious ritual, and its blind acceptance of one ideological understanding.

If liberal arts education should teach us anything, it is that history and terminology are complicated.  This moment would have been an excellent opportunity for Harvard to have a discussion about the history of witchcraft, demonology, and true religious tolerance.  After all, Satanism is a religion, though it is non-Christian, and therefore it does not easily fit into the Christian limits of tolerance and interfaith dialogue.  Does religious tolerance only apply to those religions that certain Christians find tolerable?  Yes, Satanism contains elements of Catholic Christianity, just as Catholic Christianity contains elements of Judaism.  In some sense, one could read the Catholic Mass as an abhorrent parody of the Passover, or rituals in the temple.  These types of examples could go on endlessly.

Final Thoughts on Mocking as a Strategy

If the intention of these students was really to undermine Catholicism with this black Mass, then they failed miserably.  It should be noted that the students have claimed that this was NOT the intention of their re-enactment of this ritual. In fact, it just created a situation in which certain Catholic groups can now claim victimhood and offense.  Something that non-supernaturalists can learn from this situation is that mockery seldom works to one’s advantage, especially in a predominately supernatural milieu.  If one appears aggressive or disrespectful, then the other group can claim persecution, and garner sympathy and support for their views.  Christianity has long understood that martyrdom and persecution are the perfect environments for creating more adherents.

The situation in Harvard is a perfect example of this.  Instead of siding with the students in the Cultural Studies department and educating these offended Catholics about modern Satanism and the black Mass, Harvard’s president attended a Eucharistic Holy Hour.  In fact, now the reality of the “black Mass”as an ideological construct of religious zealots has been eclipsed by this alleged anti-Catholic narrative.  Sadly, at the end of the day, fear-mongering and misinformation triumphed.