April 8th of this year was Equal Pay Day.  This rather unpleasant “holiday”, which originated in 1996, symbolizes the amount of additional days women must work in order to earn the same amount their male counterparts did the previous year.  This year, Obama recognized the day with an official acknowledgement of the injustice and a call to the nation to recognize the contributions and skills of America’s women in the workforce.  The next day, Republicans in congress blocked the reopening of discussion on the “Paycheck Fairness Act,” which would work to end unequal pay based solely on sex, and a number of articles reminded us that even in the Obama White House women make about 18% less than men.

With women now out-earning men in higher education degrees, increased protections against discrimination in hiring practices, and over fifty years of progress since the signing of the Equal Pay Act in 1963, it’s hard to find reasons why the gender wage gap could still exist – but it does.  According to a fact sheet from the Institute for Women’s Policy Research, the additional three months of work reflect the approximately 81 cents white women earn to a man’s dollar across industries. For African American women, Equal Pay Day would fall closer to June, and Hispanic/Latina women, who earn 55 cents to a white man’s dollar, would have to wait until July. There are no statistics on the pay-disparity for trans* women, lesbian or queer women, or women with disabilities, but as populations with the smallest amount of job and anti-discrimination protection, it is safe to presume that the numbers are no better.

While women are working hard to successfully crack glass ceilings and “lean-in” to their male-dominated fields, most women still work in female-dominated or “pink collar” industries. Traditional ideas of “women’s work,” like those in the service and care industries, are low paying to begin with.  Twelve of the twenty most common occupations for women have earnings at or close to the poverty level for a family of four, and women make up two thirds of the nation’s minimum wage workers. Women “choose” these jobs for myriad reasons, among them that they know their presence will not be met with hostility. Pink collar jobs value attributes of a stereotypical femininity: patience, empathy, and importantly, nurturance of children and the elderly.  Because of this, they are often a natural choice to the many women who are raised to feel they must embody these traits. 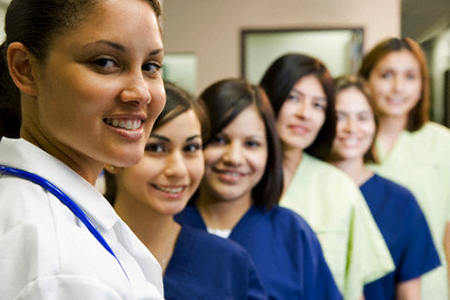 The traditional gender role of a woman as a family’s primary caregiver is ubiquitous.  Regardless of their status as a stay-at-home mom or full-time employee outside the home, it is women, not men, who are expected to fill the role of the nurturing, self-sacrificing caregiver.Whether or not this is explicitly stated in the workplace, it is a presumption that has held women back from equal pay for generations.  If a woman has children she can expect a negative impact on her wages, while for a man this fact is irrelevant.  The expectation that it is mothers who stay home with a sick child or sacrifice work to attend a school meeting gives employers the feeling that they can turn down a well-deserved raise, or start mothers off at a low salary.

New Studies on the Rise of ‘Pink Collar’ Men

Since the economic crash and subsequent extended insecurity in the job market, there has been an influx of male “pink collar” workers.  Some of the men interviewed for the piece cite their pink collar careers as things to do while they “bide their time,” before jumping to a “better” profession.  Others describe the new-found respect they gained for their female coworkers and the rewarding nature of their careers.  Whatever their reasoning or experiences, the number of pink collar men is increasing.  Between 2000 and 2010, the Times article found, there were more than two thirds the number of male bank tellers and waiters, and twice as many receptionists and nurses.  The numbers here are still very small.  The doubling of registered male nurses took their overall percentage from 8.4 to just 10.5 percent, but the number is growing.

Surprisingly (or not), even historically female-dominated industries do not offer equal pay to their overwhelmingly female employees. Teachers, nurses, administrative assistants, cashiers – in fact all of the most common occupations for women – show the same patterns of gender wage disparity found elsewhere in the job market.  Recent work at Pricenomics, a blog that collects and analyzes data from popular websites, found that while only 2.9% of babysitters are male, they still out-earn female babysitters.

While men are not necessarily “stealing” jobs in these rapidly growing industries, they are receiving higher salaries, getting offered more promotions, and gliding rapidly on their “glass escalator” to higher positions.   It is a clear affront to women who have worked the same amount or harder to succeed within these careers.  Men’s easy sweep of pink collar industries, along with the appropriation of feminine roles for lack of “better” options, provides a distinct illustration of the injustice women face in trying to succeed in the job world today.  The message to women is clear: even within the few industries that appreciate traditionally feminine attributes, have given women unprecedented leadership roles, and have provided spaces where women can feel safe and appreciated for doing their jobs, a man is still worth more.

But what if the acceptance and success men have found doing “women’s work” is the very thing that finally closes the gender wage gap?  An influx of valued men in pink collar positions might sufficiently subvert male gender norms to allow for the idea of men as primary caregivers – stripping away a primary cause of gender wage inequality. Consider the scenario of the male babysitter.  Yes, he is making more money than his female peer, but it’s possible that incentivizing babysitting jobs might spur an increase in men choosing the caretaking position, as well as acceptance by families of hiring a male babysitter.

How does this benefit women? First, an inclusion of traditional “women’s work” into the male gender norm encourages equal responsibility in child care and domestic work.  This partially relieves women from the responsibility of choosing jobs that accommodate the extra domestic work expected of them.  Freedom in job choice allows women to break into non-traditional and higher-paying positions.  Second, a new image of men as care-givers and service-providers would remove an employer’s assumption of a female employee to be the primary caregivers within her family.  With that expectation removed, women would no longer receive unequal pay based on their status as a parent.

Should women who work pink collar jobs stop fighting for equal pay in order to encourage more men to enter the industry?  Absolutely not.  Earning less money despite equal qualifications is intolerable, and people of all genders must continue work to end discrimination not just based on gender, but also on race, disability, age, orientation, and religion.  My point is simply that encouraging men to pursue non-normative gender roles through acceptance in pink collar industries may work to end destructive gender norms that have for generations kept women from receiving equal pay.

So consider hiring a male babysitter – and maybe paying both him and his female peers a little extra for their valuable work.