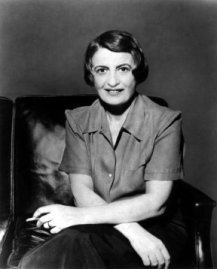 Ayn Rand: A silly pseudo-philosopher who argued for Ethical Egoism, which she decided to dub ‘Objectivism’ because she was apparently unaware of the centuries of debate over and dismissal of the concept by almost all academic philosophers.

I’m getting pretty tired of hearing Ayn Rand fanatics, economics undergrads and those who misinterpret the ‘selfish’ gene talk about how egoistic the human race is and how the existence of altruism is just a naive myth.  Less annoying, but still disappointing, are also a number of scientifically uninformed authors, like the Dalai Lama (who otherwise I really like), who say that science cannot explain the altruism we clearly observe in ourselves and others.

At first brush, it might seem intuitive that natural selection (which favors those who outperform others) would completely rule out altruism (which favors others on par or above oneself).

Fortunately, many of those reading this who are familiar with a bit of evo biology and psychology are already aware of several flaws in this superficial “first brush”.  But before getting into how altruism could have evolved via natural selection, let me make clear what I mean by altruism?

By “altruism” I don’t mean Evolutionary Altruism.  Here a cost, in a single interaction, is imposed on one’s own fitness in order to promote the fitness of others.  This is irrelevant to our present concerns for two reasons.  First, it only refers to fitness, or reproductive success.  So, by definition you can’t engage a sterile individual altruistically.  Second, it says nothing about motivations, intentions, or anything moral.  Richard Dawkins has a great example of how silly the evolutionary idea is when considering the moral use of altruism.  To the evolutionary scientist, a lion with genes that lead to poor teeth may have an altruistic adaptation.  Why?  Because the lion will eat at a slower rate, which then leaves more meat for the other lions and less for itself.

Instead, I am talking about Psychological Altruism.  This refers to the motivations and emotions one has.  Specifically those that place another’s well being and interests (instead of their reproductive success) on par or above their own.

For a great analysis of this distinction, see Unto Others by evo biologist David Wilson and philosopher Eliot Sober.

For those unfamiliar with Kin Selection, you can check out the link.   The basics of KS focus on how natural selection operates on genes instead of individuals.  Since one gene is just the same in your body as your brother’s or cousin’s, natural selection will favor those individuals who sacrifice part (or completely, as in ants and bees) their own fitness to further those of their relatives even more so.

Now consider these additional facts: 1) our predecessors likely lived with small groups of mostly relatives throughout most of our evolutionary history, and 2) evolved behaviors work on heuristics, not algorithms, and therefore sometimes “misfire” when in contexts other than what they evolved in.  Given both of these facts, we can reasonably propose that certain altruistic behaviors, emotions, motivations, etc might have been selected for, at least in part, through kin selection that in today’s society would lead to more a general altruism.

But let’s rewind a bit.  Way back in our Evo Timeline a behavior evolved because it increased the fitness of those around the individual, even at their expense, who were almost always kin.  However, the behavior itself didn’t ‘track’ whether or not they were or were not kin.  Instead it worked off a heuristic like “be selfless with others you’re working with”.  This heuristic was effective because it was more efficient and most of those “others” were in fact kin.  However, fast forwarding to today, “others” is likely just “others” since we work and live closely more often with non-kin, and even people half way around the world.

An example is seen in some birds who give out alarm calls.  The individual bird takes on a risk of being the target of the predator by pausing and calling attention to itself.  However, the bird doesn’t intend to warn it’s family.  It instead just instinctively reacts by giving a call (which we do too when we scream in fright), which then alarms whoever is around that there’s danger.  The trick is that “whoever is around” has through most of its evolution been its kin.  Now imagine the group that the bird normally hangs out with changes from being mostly kin to mostly non-kin – like has happened with modern human societies.  For instance, it’s moved to a zoo.  The bird will act the same and call when it sees a predator, hugely helping out unrelated birds at a small cost to itself. 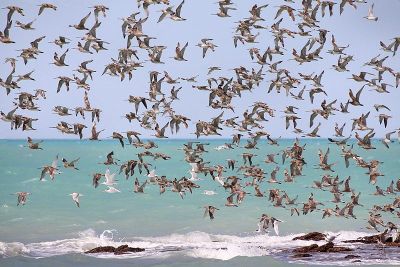 Why do we scream when we see something scary? Wouldn’t natural selection want us to stay hidden and undetected? Likely part of the reason we scream is to warn others around us, saving them (and their genes) even at the risk to ourselves.

That the root of altruism is grounded in part via kin selection also works nicely with what anthropologists call fictive kinship.

Though this is one of the weaker examples I want to go over, I started with kin selection because it is familiar to most people and I feel KS at very least added something to the selective pressure for altruism in our history.  Remember, among the 7 options I’ll cover none are mutually exclusive of the others and are likely all part of the story.

2. An Extra Aid to Reciprocal Altruism

A second possibility is that some of our moral emotions got kick started as aids to reciprocal altruism.  Reciprocal altruism was first proposed by Robert Trivers (who is here at Rutgers) and is a bit related to Tit for Tat in game theory.  The basic idea of RA is the heart of “you scratch my back, and I’ll scratch yours”.   I may take on a cost to myself now to help you out, but later down the line you’ll do the same for me.

Two cleaner fish removing dead skin and external parasites from a grouper, who is an otherwise fearsome predator

This is seen quite a bit in the animal kingdom.  One of my favorite examples is the cleaner fish.  Cleaner fish hang out all day in a little nook in a coral reef waiting for ‘clients’, often big predator fish, to drop by.  The big fish get their teeth cleaned and the cleaner fish get a snack.  Everyone wins.  However, the trick is for the predator ‘client’ fish not to cheat and eat their cleaner friends after they’re finished.

For a bunch of small brained fish the evolutionary mechanism that helps the predatory clients stave off cheating, and then reap even greater benefits of reciprocity over time, might be purely instinct.  But for animals like ourselves with more complex psychologies, moral emotions like guilt over cheating, pride that “my word is my bond”, a sense of honor and honesty, shame in letting others down, pleasurable relief in paying one’s debts, social norms of responsibility, and so on might help us suppress the temptation for immediate benefits so we can then pursue the long term benefits of reciprocity.

Cheating is tempting, but in the long run leaves us much worse off since it burns bridges we need later on.  Therefore a here and now emotional pull towards valuing others’ interests and well being, i.e. altruistic emotions, would certainly help us avoid screwing them over in the short term to maintain reciprocal relationships in the long term.

Further Possibilities for the Evolution of Altruism

5. Social Selection and Keeping up With Norms
6. Group Selection, Cooperation, and War

2 responses to “The 6 Ways Altruism Could Have Evolved: Part 1, Kinship & Reciprocity”