Last week, I gave a brief introduction to an immersive, dramatic, and academic style of live-action role-playing known as Nordic larp.  This week I am going to share more about my experience playing in the first U.S. run of a full-length game called “Mad About the Boy” (MATB).

MATB, based on the premise of the popular comic series Y: The Last Man, is the story of our world in the wake of the sudden and catastrophic death of every human with a Y chromosome.  The game takes place three years after this disaster, and provides an opportunity to explore some big questions about how a society of women would cope and rebuild after such an event.

Players hike through the woods to the site where game-play will begin. (Photo: Liz Rywelski)

Naturally, ensuring the survival of the human race was a primary concern of this new society, so the American government had seized control of the sperm banks.  In the world of the game, the government was finally ready to implement a trial run of an insemination program, and the characters in the game were all there to be considered for the opportunity to become parents.  However, family structures had undergone some necessary changes in this transformed civilization, and the three-person unit (called a triad) was deemed to be more stable, a necessary precaution when the babies’ survival would be more important than in any previous generation.  Each triad would be meeting with a committee made up of a government representative, a medical doctor, and a psychologist who would be ascertaining their suitability for parenting.

The larp – which, for most of us, was our first foray into Nordic larp – took place over a weekend last October at a wooded campground in Connecticut.  We kicked off with a series of workshops and exercises designed to help us get to know each other and develop our backstories.  Providing this time to bond and develop trust among the players before game-play even starts is an integral facet of Nordic larp.

The game officially started the next day after lunch, and was signaled by Dinah Washington’s rendition of the song “Mad About the Boy”.  We then hiked through the woods to a site where we began the game in-character with a remembrance ceremony for the men who had died three years earlier.  Over the next several hours, we would wait for our interviews with the committee, and then wait some more for their deliberations. 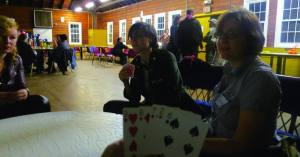 While waiting for their interviews, characters bide their time conversing in small groups or playing card games. (Photo: Liz Rywelski)

In Nordic larp, the GMs take a very passive role.  They neither steer the plot nor make decisions about your character’s experience.  Every single thing that takes place in-game is role-played.  Although it took some getting used to, I actually really enjoyed the unstructured time our characters were given.  Sometimes things moved slowly, and sometimes things move quickly – just like in real life.  In the quieter moments, I felt more a part of a real world, and I filled the time making small-talk with the other characters.  This created a richer, more nuanced experience which lent itself to deeper reflection on the themes of the game.

I played a character named Helen who was part of the “Nuclear Family” triad.  Helen was a mother, a woman in her 50s, and a far cry from my own personal life experiences.  Helen was there with her son Thomas, a transman who had “survived” the virus because he did not have a Y chromosome.  Being a man in a world without men brought about a set of unique and significant challenges that the family was learning how to navigate together, and which necessarily made Thomas one of the most prominent characters in the game.  The third member of the triad was Thomas’s girlfriend Melissa, an emotionally unstable young woman who was recovering from an abusive past.  Our triad wanted a baby for the reasons most families do.  But we were competing with a diverse array of family units who each had their own reasons, like the “Muslim Sisterhood” who wanted to raise a child in the Islamic faith, a group of “Artists” who were planning to make a documentary about the baby’s journey into this brave new world, and a group of “Survivalists” who lived in a separatist, self-sufficient community.

The climax of the game took place on the third day.  We knew what was about to occur as a players, but our characters were in for the shock of their lives.  At breakfast, while awaiting the committee’s decisions about who was to get a child, a man suddenly burst into the room, naked and bleeding.  Chaos ensued as the characters immediately splintered into factions and became hostile, manipulative and stubborn.  Everyone formed an immediate opinion about what should be done with the last man on earth, and then tried to implement those plans to the point of conspiracy and deception.   Although I had anticipated that this moment might instigate competition and conflict, I was surprised and saddened to see how it also began to tear families apart.

The weekend concluded with “debriefing” sessions in which we shared our experiences, talking about the questions that arose and the lessons we learned.  To me, this debriefing is the most important part of Nordic larp.  First, it acknowledges and validates the deep experiences one sometimes encounters while role-playing, instead of dismissing them as mere play.  But in addition to allowing time to process our personal experiences, the other important role of debriefing is to provide a space in which to think critically about the game within a broader context.  It was in these conversations – which continued via e-mail and social media for weeks after we left Connecticut– that we talked about the thought-provoking questions that had arisen, and the lessons we had learned.

And I believe that you do learn through larp, because there are many ways of knowing, and the visceral, ephemeral experience of larp resonates with ways of knowing which we don’t always get to exercise.  For one thing, larp teaches you to empathize with others.  Nordic larp in particular encourages you to take on roles that are not necessarily similar to your own experiences.  In these situations you quite actually stand in someone else’s shoes, and it is often a rewarding experience to learn to see from a different point of view.  Because of this, larp is an excellent pedagogical tool for teaching through modeling.  We learn by doing.  That is why, for example, a student participating in Model UN might better come to grasp the depth and complexity of solving global problems when she is faced with making those kinds of decisions herself.

In MATB, the lessons I learned from playing Helen were not insignificant.  I gained a deeper understanding of motherhood and what it means to keep a family together, and it helped me develop a stronger appreciation for my own mother.  It also pushed me to think about the experiences of trans* identities in new ways, and added a very personal element to my academic thinking around sex and gender.

Thomas comforts and reassures a distraught Melissa in the background. (Photo: Liz Rywelski)

As a whole, the game prompted all of us to think carefully about the complex issues of gender, parenting, and the role of government.  We had to ask, if this sort of disaster were to occur today, what parts of our society would break down first?  Who would become the President?  (We determined it would be Hillary Clinton.)  Would some parts of the country be impacted differently than others?  Would some parts of the world be impacted differently than others?  We had to think about the personal impact as well:  How would romantic relationships and sexual orientation start to look to different?  How would gender roles and identities be affected?  Would a masculine/feminine binary still evolve?  Would bodies still be policed by patriarchal ideals?  How might men’s bodies become objectified and commodified?  And in terms of dealing with all this major change, what really is the role of the government?  How are decisions for and in a community made?  And how different would those decisions be from the ones we make today?

These are all serious questions, and I believe that games might be perfect tool for exploring how to answer them. Who’s to say games must always be cheerful?  Why can’t play be serious, too?  I believe there’s merit to play that reflects the things we really feel and do.  After all, there are many genres in other kinds of entertainment like books and films, so why shouldn’t there also be many genres of games?  Nordic larp opens up a space for serious play, and I hope to see more serious play in the American larp scene in the near future.

As I mentioned before, Lizzie Stark’s book Leaving Mundania is a wonderful primer on larp for newcomers, and the last two chapters are excellent for life-long gamers who just want to know more about the Nordic style.

Here is a short 20-minute presentation called “Introduction to Nordic Larp”.  (If you like that, you can find plenty more Nordic Larp Talks here.  In fact, this year’s talks are taking place this very week in Oslo, and you can watch a live stream on Wednesday, April 17th at 2:00pm EST.)

Also taking place this week is Knutepunkt, an annual conference about larp.  Every year they also compile and publish a book of academic articles about larp.

If you want to know more about “Mad About the Boy” in particular, you can read a full manuscript and all character descriptions here.

A beautiful book documenting our U.S. run of MATB, filled with pictures and reflections from the players, is published online here.

Two more runs of the game are taking place this coming summer in Sweden as well, so pop over here if you’d like to participate.

You may also be interested to read some thoughts I recently shared on what it’s like to larp while vegan.

3 responses to “Nordic Larp: What It Is And Why It Matters (Part II)”