Is conservative ideology better or worse than liberal ideology?

That’s a tough question!  But more or less, it’s what this study is proposing to answer.  Obviously, we have to get a lot more specific.  So let’s rephrase this research question as

Do Republican states do better or worse on what matters than Democrat states?

Again, a huge (and still fairly vague) question!  Why look at states?  Why look at political parties?  What makes a state Republican or Democrat?  What kinds of things “matter”?  What do you mean “better” or “worse”?  OK, OK, I’ll make it a little more specific

Well, to parse apart any other ambiguities and learn how I went about answering this question, please check out the rest of this article.

You should totally read over the methodology I used, but I know a lot of readers just want to get to the results (or you can scroll back up after you’re done reading!)

Here are the four categories of indicators, a post for each:

This study uses voting patterns and political party affiliation as an indicator of political ideology and implemented policy, which it then correlates with economic and quality of life outcomes.

To connect all of this, three “common sense,” non-partisan assumptions are made about causality.

Of course causality is a whole big mess.  But these are all fairly common sense and strong assumptions about causality that both political parties can agree on.  So if you think the correlations this study finds are spurious, then you have to dismiss one of these fairly obvious facts.

Further, this study sets up temporal precedence.  Some have pointed out that it may be the case, for instance, that Blue states don’t become rich, but rich states become Blue?  Or maybe some other factor is causing both Blue-ness and rich-ness?  However, causal precedence accounts for this by first measuring A) the presumed cause before B) the presumed effect.  More specifically, I look at

And I don’t look at

Lastly, none of this is perfect.  Every study can only ever looks at correlation.  You can never measure causation.  But 1) claims about spurious correlation lead to absurd conclusions about commonly held beliefs and 2) this study accounts for causal precedence.

You may want to check out my article “How Correlation Does and Doesn’t Imply Causation” for more.

Presidential election results were chosen over elections for the governor or other state legislators or officials as an indicator of a state’s political policies and culture for several reasons. Initially, the argument for preferring gubernatorial or other state elections makes sense since they have a larger and more direct influence on a state’s legislation.  However, the Presidential election 1) reflects more of the population and 2) uses the same definitions for “Democrat” and “Republican.”  More specifically,

Dark and light Red and dark and light Blue, plus Purple, were initially used to categorize states, resulting in five categories.  However, this was reduced to three categories for simplicity’s sake in data analysis and ease in visually parsing apart the data.  However, each state was assigned a number, either 1, .5, 0, -.5, or -1, corresponding to these five “hues,” respectively.  If no strong trends emerge during data analysis, or if a future researcher has the time and energy to do so, the data set may be broken down into these five finer categories and re-analyzed. 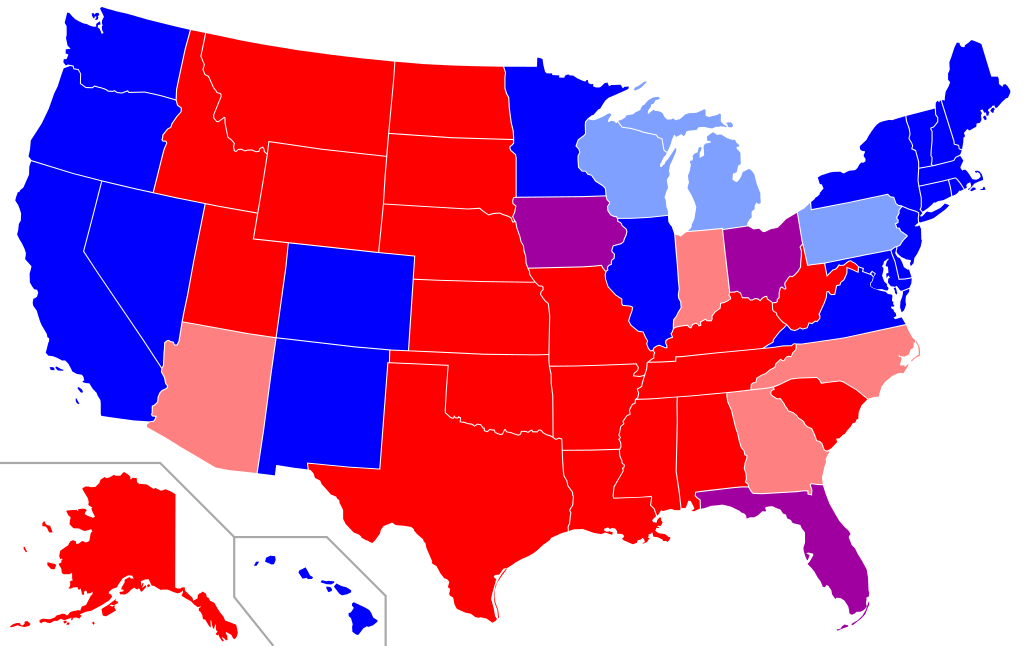 Only indicators of economic and quality of life outcomes that are “non-controversial” or “common ground,” i.e. agreed upon as positive (or negative) indicators by both political parties, will be used.

Examples of controversial variables are abortion rates, marijuana use, immigration, climate change policy, evolution being taught in schools, or LGBTQ marriage.  Generally, Democrats and Republicans would disagree when assessing these as positive, negative, or neutral in terms of economics or quality of life.

The purpose of this is so that I can only include so many indicators and I don’t want there to be any squabbling about the results.

Please note, especially if you’re a conservative leaning, that two conservative preferred indicators are included in the “controversial indicators” post.  Both are discussed in the next section and included because my conservative dad was adamant about it.

Examples of Indicators that were Excluded

*Note: A post will be created about these “Controversial Indicators” but they won’t be used to calculate Red vs Blue comparisons on the Economy, Crime, Society, or Health.

Single parent households with children is an interesting indicator and was explicitly rejected for two reasons.

Abortion rates is another notable indicator that was excluded.

Indicators were also excluded and deemed “controversial” if the best data sets I could find were, for example,

Red States and Blue States will count for 1 for their respective category.  Purple states will count for 0 given that it’s equally likely, with the rough indicator used in this study, that the relevant policies would be either liberal or conservative leaning.  Are they following the general trend or an outlier?  Impossible to say without looking more into it.  In comparison, while it’s likely all Red States have some liberal leaning policies, and vice versa, Red State policies lean conservative.

Data will be analyzed in five ways, which be tallied together for an overall score for each indicator

My first masters was a research based Masters in Science in Comparative and International Education (basically “sociology of education”) degree from the University of Oxford.  A third of my coursework was in research methodology and my degree was awarded based on performance on a research based dissertation.  I wrote mine using data I collected during a month and a half of fieldwork in Bosnia.

I also took courses in research methodology and statistics during my second masters program for clinical social work at Columbia University.

I’m not getting paid for any of this, not even through any ad revenue.  Honestly, I’m just bored during the pandemic.  So I’m beholden to no financial incentives or agendas, except my own.

My agenda is to construct a study that conservatives will accept. To that end, much of the above was done to avoid claims of being biased, bending the results, etc.  For instance, I sought out a number of conservative family and friends to suggest indicators and discuss my methodology.

Full disclosure, I’m a Democrat and fairly liberal leaning myself.

However, I was raised very fundamentalist and conservative and identified with such into my early twenties.  I even voted for Bush the first time I cast my ballot in a Presidential race.  It wasn’t until the end of college – after learning about many of the statistics above! – that I became more left leaning.

Today I’m certainly left on the spectrum, but I’m also still notably moderate on a variety of issues.  In fact, I like to think of myself as a “European moderate.”

All this being said, I’ve included links to all of the data sets I’ve used, which are either the sources of the data or link to those sources.  So if you disagree, please check them out or find different data sets, and let me know!

8 responses to “Research Methodology — Are Red or Blue States Better?”