Jesus says a lot of great things – don’t get me wrong.  But too often he, at best, fails to comment on some of the most important issues of the 21st Century.  At worst, he perpetuates a morality we have and should leave behind.  Again, there’re still lots of amazing lessons coming out of the Gospels that modern men and women desperately need to hear.  But on some of the most important current issues he either doesn’t say enough or we need to flat out ignore him.  This is all of course made so much worse by the fact too many Americans still look to Jesus as their guiding, or even only, moral role model.

“What Would Jesus Do?” is an increasingly narrow question to ask.   We need some diversity.  We need new role models for a new world – even if they’ve been around for quite a while already.  So, may I suggest, in addition to asking yourself “WWJD?” also asking “WWBD?”

Below are a five lessons we need to hear in the 21st Century that the Buddha can provide, but where Jesus unfortunately fails to help.

The scriptures have problems – whether they’re Christian or Buddhist.  We have to start by admitting this.  The days of infallibility, role models that assume airs of perfection, and the idea there is any ‘obviousness’ in morality and religion are over.  And good riddance!

So first, we need a role model that can admit when they’re wrong, who can accept dissent, and who will give us an example of how to change our mind when confronted with new evidence and arguments.  At this task, Jesus fails.

Jesus said, in no uncertain terms, that “I am the way, the truth, and the life. (John 14:6)”  Right after this in the rest of that passage Jesus claims omniscience since whatever he says is “not on his own authority” but directly on behalf of God the Father.  Nowhere in the Gospels does Jesus say, “oops, no, you’re right.”   His views never changed or grew.  He just had the answers.  Even as a young child, as the Gospels go, he was teaching the oldest Rabbi’s what was up.

The Buddha on the other hand started from a place of ignorance – a place we all must realize we start from.  He explored one option, then another, and found them wanting.  He was wrong again and again and grew as a person.  Enlightenment was difficult and wasn’t guaranteed or handed to him through some omniscient being.  Even after enlightenment, the Buddha still admitted he was wrong in some cases.  Once, when his disciples argued with him, he actually changed his mind about letting women become monks.

Think Things Through for Yourself

The idea of directly receiving divine omniscience is enough to shut down any need to think critically for yourself.  But if divine knowledge isn’t enough, you also have to believe on faith.  Who can forget the story of Doubting Thomas who Jesus rebuked for suspending belief until he got some evidence?  “Because you have seen me, you have believed; blessed are those who have not seen and yet have believed. (John 20:29)”  Paul later defines faith as “Now faith is confidence in what we hope for, and assurance about what we do not see. (Hebrews 1:1)”

Caravaggio’s “The Incredulity of Saint Thomas”

The Buddha, on the other hand, stresses over and over the importance of working things out on your own.  Of course we all need teachers to help us, but don’t take anything just on authority.  If it doesn’t work, then scrap it – even if it came directly from the Buddha!  For the sake of space, here’s a great discussion of the Kalama sutra where the Buddha addresses these issues most directly.  Personally, I love the Zen Buddhist koan:  When you meet the Buddha on the road, kill him.  Long story short: this koan reminds us that we shouldn’t blindly attach ourselves to anything, even (our conception of) the Buddha.

If Marriage isn’t About Happiness, Get Divorced

A little intellectual humility might have gone a long way for Jesus, who was just plain wrong on a bunch of things: divorce being the clearest example.  Not even conservative Christians agree with Jesus on this one.  In no uncertain terms, Jesus says, “I tell you that anyone who divorces his wife, except for sexual immorality, and marries another woman commits adultery. (Matthew 19:9)” Strong words!  Spousal abuse?  Don’t love each other anymore?  Too bad.

The Buddha in contrast thought that marriage was about happiness, although he spoke precious little about the institution.  For him it was a civil, secular issue and not some sacred ritual about two becoming one flesh, or some other divine plan.  Be compassionate, concerned with others’ well being, and try to work it out, of course.  But if it doesn’t produce happiness in your lives, then you should move on.

Violence is Just Not OK 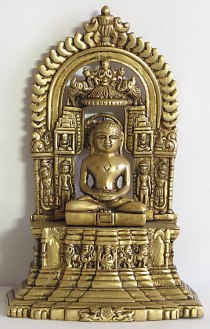 Mahavira, The Torchbearer of Ahimsa in Jainism

Christians love the “turn the other cheek” quotations, but isn’t it somewhat odd that a prophet that apparently promoted non-violence should end up producing a religion with such history of violence?  The answer is that Jesus actually wasn’t really all that peaceful.  For instance, people love Jesus’ rebuke about not “living by the sword”.  But that is only one version of the story.  In Luke’s version, before the confrontation at the Garden with Judas and the Roman soldiers, Jesus first commands his disciples “But now if you have a purse, take it, and also a bag; and if you don’t have a sword, sell your cloak and buy one. (Luke 22)”  Luke’s Jesus also gives no rebuke about ‘living by the sword’.

Further, Jesus makes and wields weapons himself to force social change.  When Jesus comes upon non-violent individuals who ‘desecrate’ a place he holds as holy he violently chases them out – a bad precedent to set in the Middle East.

And He found in the temple those who were selling oxen and sheep and doves, and the money changers seated at their tables. And He made a scourge of cords, and drove them all out of the temple. (John 2:14-15)

And this is something Jesus physically did himself.  I don’t have space for all of the parables he’s told where the antagonist of the story gets brutally murdered or worse.

The Buddha in comparison abhorred all violence.  Ahimsa is the goal of extreme nonviolence that has no parallel in the Christian tradition.  Much more, in comparison to using whips and swords himself, the Buddha forbade as immoral even being involved in the production of weapons.  In the Dhammapada chapter 26, for example, the Buddha says “Him I call a brahmin who has put aside weapons and renounced violence toward all creatures. He neither kills nor helps others to kill.”

However, there is one story worth mentioning that proves the rule.  In one of the Buddha’s past lives he killed someone in order to save others.  But even killing for this reason, so the story goes, stalled his ability to achieve enlightenment in that life.

Extend Your Moral Circle to Animals

Jesus was great at extending our moral circle to other people.  The parable of the Good Samaritan will forever be a timeless classic.  Like I said, there is a lot we can learn from Jesus.  But unfortunately, the circle stops once it includes all homo sapiens.  Jesus just couldn’t care less about animals.  Sure, maybe it wasn’t in the divine plan to eat animals in the Garden of Eden, but Jesus nowhere criticizes killing animals, much less praises vegetarianism as something worthwhile to should aim for.   Saint Peter even later extends the number of animals Jews/Christians are allowed to kill and eat.

Worse than this, however, Jesus shows unnecessary cruelty to animals.  When casting out the demons from a possessed man in Mark 5, Jesus randomly decided to destroy 2000 pigs.

“A large herd of pigs was feeding on the nearby hillside. The demons begged Jesus, “Send us among the pigs; allow us to go into them.” He gave them permission, and the impure spirits came out and went into the pigs. The herd, about two thousand in number, rushed down the steep bank into the lake and were drowned.”

Putting aside the economic loss to whoever owned the pigs, the pigs lives themselves meant nothing.  The pleading of a literal demon outweighed their value as sentient creatures.

For the Buddha all life is precious.  Vegetarianism is a requirement for a monk.  There is no arbitrary line making humanity more special or deserving of compassion than animals.  If you feel pain and happiness then you matter, period.

I’m not trying to criticize Jesus.  I applaud much of the amazing social reform his teachings have inspired.  I’m just saying we need more than the Gospels can give us.  Christianity isn’t enough.  And I’m concerned about the millions of Americans, as well as others around the world, that focus on one single role model – whoever that role model is – that so clearly ignores or stands against many of the important things we need to change about modern society.

Paul Chiariello graduated from Rutgers in 2009 after studying Philosophy and Anthropology. Currently he is on the Board of Directors of the Rutgers Humanist Community, Co-founder of the Yale Humanist Community, and Director of the Humanism & Philo Curriculum for Camp Quest.  Paul has a MSc in Sociology of Edu from Oxford, completing his field research in Bosnia on religious identity conflict. He also spent a year studying philosophy of ethics and religion at Yale on a PhD fellowship.  He has worked with research organizations and schools DC, the UN, Uganda, Kenya, India, Indonesia and Germany.